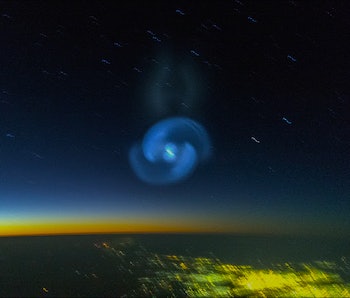 On Sunday night, SpaceX underwent its first mission of 2018. Elon Musk’s aerospace company was contracted by the U.S. government to launch a secret spy satellite, known as “Zuma,” made by the military contractor company Northrop Grumman Corporation, into low-Earth orbit.

Everything seemed to go off without a hitch. Liftoff of the Falcon 9 went smoothly and the rocket booster later landed safely back near Cape Canaveral. SpaceX had apparently completed its third classified mission for the U.S. government, until reports came out Monday saying that Zuma never made it to orbit and is presumed to be a total loss.

The Wall Street Journal reported Monday that government officials had been briefed about the alleged destruction of the secretive payload. No clear answers were provided, just a lot of vague statements reiterating that this mission was classified. This sparked space enthusiasts across the internet to begin theorizing about what exactly happened to Zuma.

Their resounding answer to a spy satellite estimated to be worth over a billion dollars simply vanishing? Suuuuuuuuure it did.

Dr. Marco Langbroek, a multidisciplinary scientist based in the Netherlands, started a Twitter thread that refers to evidence that he believes proves the mission was a success. He cites a photograph taken by a Dutch pilot on Monday over Sudan of what appears to be the Falcon 9 upper stage venting fuel ahead of re-entry roughly on schedule in terms of where it was supposed to be.

“This shows that the Falcon 9 certainly did reach what appears to be the intended 50 [degree] included LEO orbit [and] did its nominal re-entry burn,” tweeted Langbroek. “…So if anything went wrong at all…it is either Zuma being successfully deployed but dead on orbit, or not detaching from the Falcon 9 upper stage.”

“After review of all data to date, Falcon 9 did everything correctly on Sunday night,” Shotwell says in a statement. “If we or others find based on further review, we will report it immediately. Information published that is contrary to this statement is categorically false.

If this is true, then Zuma must have suffered damages in orbit causing it to stop functioning, however reddit users on the SpaceX subreddit think something else is going on.

The logic behind their theories is pretty simple, but is all speculative. Zuma is supposed to be a high-tech spy satellite, so wouldn’t the government benefit from it more if no one knew where it was or if it even existed?

Redditor laughingatreddit explains that this could be the perfect plot in order to test Zuma’s stealth capabilities.

“This could be the first ‘in the wild’ test of the new satellite,” they write. “[The U.S. government] would be listening closely right now to what [sic] every adversary and foreign space agency for any chatter about detecting or tracking Zuma, the enormity of the task made especially difficult with the uncertainty of it even being there… This will be the ultimate and only real test of whether its stealth is effective against whatever sensor capability the enemy has.”

None of this can be proven with the amount of information that has been given to the press and the public. If fact we might never learn exactly what happened to Zuma after Sunday’s launch. One thing is for sure, the sudden disappearance of a mysterious spy satellite is enough to raise anyone’s eyebrow.

More like this
Culture
Feb. 4, 2023
The End of the Cold War Could Have Killed James Bond. Instead, it Made Him Stronger.
By David Grossman
Science
Jan. 26, 2023
Lucy mission: NASA goals, mission updates, and Beatles Easter eggs
By Passant Rabie, John Wenz and Doris Elín Urrutia
Science
Jan. 26, 2023
NASA just directed its Lucy mission to target a skyscraper-sized asteroid
By Doris Elín Urrutia
LEARN SOMETHING NEW EVERY DAY.
Share: