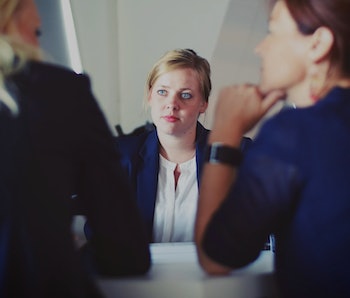 Job descriptions for some of the most elite and high-paying jobs in the country are often peppered with phrases like “exceptionally talented” and “the most brilliant minds.” Ignoring the Trumpian hyperbolism of such phrases, the message is clear: These companies want the most intelligent people around to apply for the position. The problem is, it’s exactly this sort of language that feeds into bad stereotypes of brilliance that associate intelligence with men, and therefore undermines efforts to encourage more women to apply.

A new study published Tuesday in the Journal of Experimental Social Psychology illustrates the troublesome link between between stereotypes of brilliance and the underrepresentation of women in elite occupations. Through a series of experiments, a team of American psychologists illustrate how women are more interested in jobs where other traits, like dedication, are valued — and therefore disinclined to apply to positions seeking “the most brilliant minds.”

“Women’s interest in some of these fields may be affected by the message that they need to be brilliant to succeed there, and the stereotypes of the society they live in convey to them that they may not have what it takes or they may not fit in with others working in these fields,” the study’s senior author Andrei Cimpian, Ph.D., an associated professor in New York University’s Department of Psychology, tells Inverse. “Additionally, when they try to enter some of these fields, they may encounter resistance, bias, and discrimination from others who don’t perceive that they have the qualities that will allow them to succeed.”

In a series of six experiments, the researchers interviewed male and female university undergraduate students, as well as people recruited through Amazon’s “Mechanical Turk” program, to determine why they would or would not be interested in jobs where success appears to rely on brilliance. When presented with hypothetical situations, like choosing a job or major with associated traits like “brilliant,” “smart,” and “talented,” women most often expressed anxiety and fear they did not belong in such environments. In subsequent interviews, the researchers found that this perception by the women, rather than the men, most often came back to the idea that they didn’t fit with their perceived idea of what type of person would actually get that job.

“Other variables, like modesty, didn’t really play much of a role — the stronger element was this idea that ‘I wouldn’t fit in’ and, this is where the stereotype comes in more directly, a sense that ‘I probably wouldn’t be able to succeed here,’” explains Cimpian. “There are traces of this societal stereotypes that influence women to think they wouldn’t be able to succeed at some of the highest levels of companies, or in certain fields.”

Participants were evaluated in fields outside of STEM that still experience sizeable gender gaps, such as philosophy, economics, and architecture. What these fields also have in common, says Cimpian, is an idea that only the brilliant few will succeed, and that this success hinges on innate intellectual talent.

“This research is part of a broader effort to understand why women, and in other work we’ve discovered, African Americans are being systematically excluded from some of these fields, which are some of the most prestigious and high-paying fields in our society,” says Cimpian.

Cimpian also hopes that his team’s paper will add to the call that it’s time to be more mindful in the way that jobs are presented because the repercussion is that stereotyped groups are needlessly turned away from the opportunities they are qualified for.