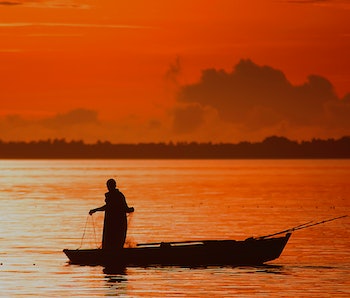 Sea levels are rising as a result of accelerating climate change, but it turns out we might be underestimating just how rapidly it’s occurring. Get ready for your world to crumble, because a new geological study is saying that’s precisely what’s happening.

In a paper published December 23 in the journal Geophysical Research Letters, Dutch and Australian geologists outline how the increasing mass of seawater has deformed the bottom of the ocean, making sea level rise in some regions appear less drastic than it really is, and as a result distorting current assessment of global ice melt. The researchers argue we’ve been underestimating annual sea level rise from 1993 to 2014 by 0.13 millimeters.

In some regions of the world this number is even bigger. For instance, the study’s authors say previous estimates of sea level rise in the Arctic Ocean have been off by up to a whole millimeter each year. A millimeter might not sound like a whole lot, but spread over millions of square miles of ocean, we’re talking about a massive amount of water.

“Because satellite altimetry observes sea level in a geocentric reference frame, global mean sea level estimates derived from altimetry will not observe the increase in ocean volume due to ocean bottom subsidence, and hence, they may underestimate GMSL rise,” write the study’s authors.

The Earth has had basically the same amount of water for billions of years, so it may sound odd that the seafloor is sinking due to increased ocean water mass. The explanation for this is pretty simple, though: Water is denser than ice, so when sea-based ice masses melt and mix with the ocean, they increase the average density of the ocean. In addition, land-based glaciers and ice-masses are melting into the ocean, exacerbating the ocean’s mass, and increasing the weight ocean floors have to withstand.

It’s like if your cereal bowl somehow got deeper, but the milk stayed at the same level. From the surface, it would look the same, but in fact, the mass of the milk has actually increased. This is what geologists say is happening with Earth’s oceans.

It’s not totally clear what a sinking seafloor means for humans, but if these geologists’ measurements are correct, then we’ve been underestimating the true rate of sea level rise for over 20 years. The biggest risk is posed to people who live on coasts and island nations — areas already being inundated by rising waters. Further research will show just how severe the underestimate has been.

Abstract: Present-day mass redistribution increases the total ocean mass and, on average, causes the ocean bottom to subside elastically. Therefore, barystatic sea level rise is larger than the resulting global mean geocentric sea level rise, observed by satellite altimetry and GPS-corrected tide gauges. We use realistic estimates of mass redistribution from ice mass loss and land water storage to quantify the resulting ocean bottom deformation and its effect on global and regional ocean volume change estimates. Over 1993–2014, the resulting globally averaged geocentric sea level change is 8% smaller than the barystatic contribution. Over the altimetry domain, the difference is about 5%, and due to this effect, barystatic sea level rise will be underestimated by more than 0.1 mm/yr over 1993–2014. Regional differences are often larger: up to 1 mm/yr over the Arctic Ocean and 0.4 mm/yr in the South Pacific. Ocean bottom deformation should be considered when regional sea level changes are observed in a geocentric reference frame.

Check out this video where Bill Nye predicts the future of the environment.