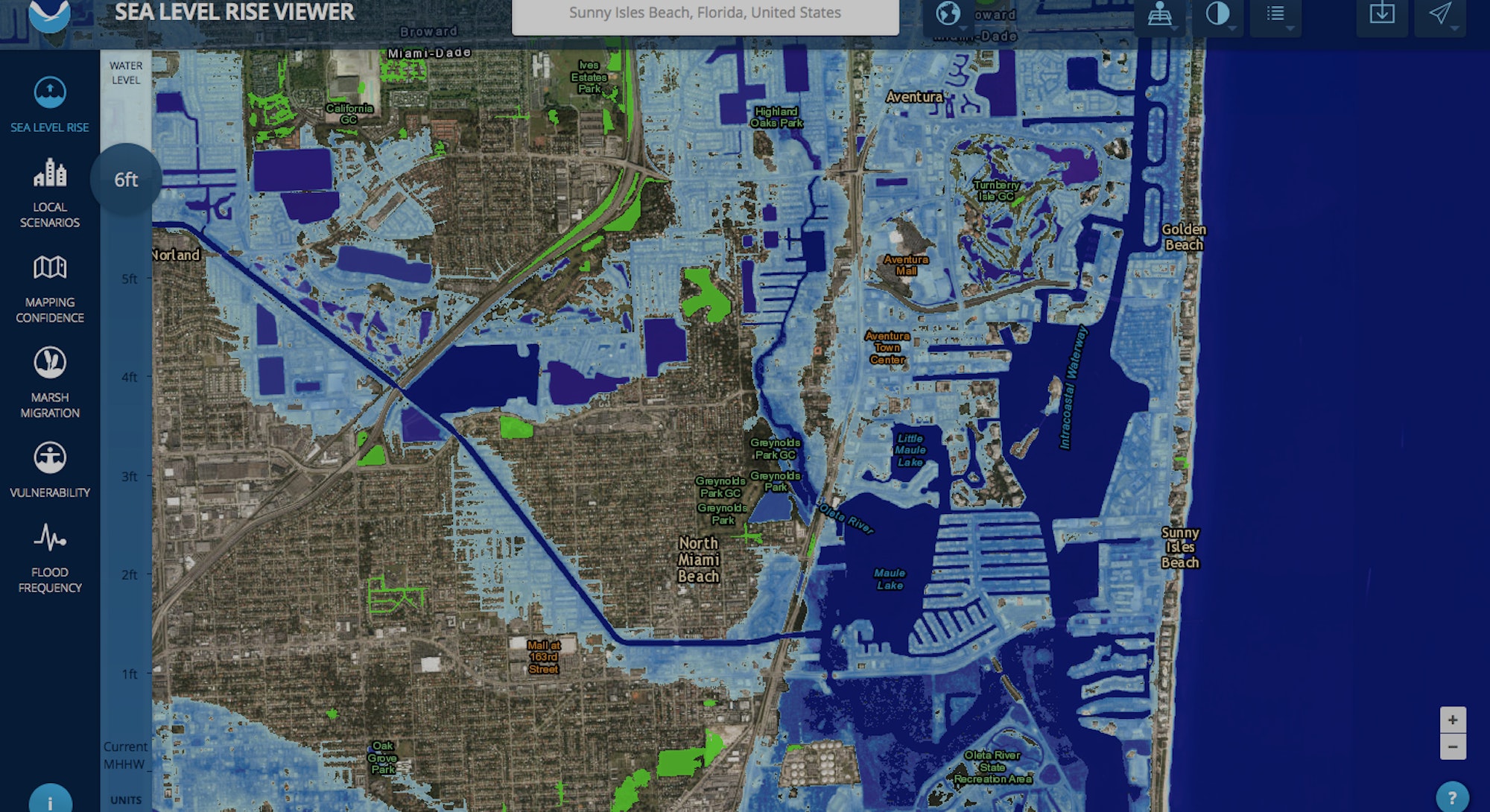 United States President [Donald Trump](https://www.inverse.com/topic/donald-trump)’s fancy for coastal real estate is going to get him in a lot of trouble in the coming decades. Around the world, he’s been putting his name on building and golf clubs on beaches that will be increasingly threatened by rising tides and bigger storms caused by [climate change](https://www.inverse.com/topic/climate-change).

The [map](https://www.inverse.com/topic/maps)s below are projections from the National Oceanic and Atmospheric Administration for what the U.S. will look like with six feet of sea level rise — the upper end of what the federal government thinks we could see by 2100.

And that’s just how they would look at an average high tide. Even today a storm surge could easily raise water levels another six feet in these places. Any sea level rise makes storm surges worse than they would otherwise be, and on top of that climate change is brewing stronger and more frequent hurricanes.

Climate change and all its dangerous effects could be coming faster thanks to Trump’s pledge to withdraw from the Paris Agreement on global warming.

Trump calls Mar-a-Lago his Southern White House, and he’s spent nearly as many weekends there as he has in Washington since the inauguration. But six feet of sea level rise would swamp half the property, including all five of the outdoor tennis courts.

These two properties count six soaring towers between them. And while certainly most of the stories will stay dry in a future of sea level rise, the whole region is going to become a lot less desirable once all the low-lying areas are inundated. Costs to save just the patch of land the buildings sit on from erosion will be enormous, let alone if the guests and residents actually want to sit on a beach.

Southern Florida is the poster child for sea level rise in the United States, and for good reason. So much of the land is within a few feet of sea level and is very densely populated. It doesn’t help that beachfront property happens to be expensive property — rich people wield the influence required to convince politicians that continued coastal development is a good idea, even when the future looks like this.

Trump National Doral’s four championship golf courses are in big trouble when Miami floods. The most surprising part is that the resort is located miles inland from the coast — which just goes to show how bad things are going to look for Florida as sea levels climb. One recent study pegs flood damages at $2.5 billion annually by 2050 for Miami alone.

The green areas of the map are technically below sea level at six feet of sea level rise, though they are buffered from the tides by higher pieces of land between them. Whether or not that land will actually protect golfers from getting their feet wet remains to be seen, and certainly the whole area will be getting a lot more boggy and soggy.

It’s not looking good for Waikiki Beach, where Trump has a couple of hotel and condominium properties. Parts of Honolulu and Waikiki could flood not only from encroaching tides but from groundwater that swells up from below because of the rising ocean.

It’s not just beautiful ocean-side resorts that will suffer from sea level rise. Lots of the world’s major centers are right on the ocean, including Trump’s hometown of New York City. Just across the Hudson River in Jersey City, Trump owns a 55-story condominium building that is absolutely threatened by rising seas and bigger storms.

These examples are taken just from the Trump Organization’s properties in the Unites States. The company also has coastal properties around the world, including in Panama, Uruguay, and the United Arab Emirates.

Despite Trump’s public denials of global warming, the real estate developer appears to recognize some problems ahead. His organization recently applied to install a seawall at its golf course in Doonbeg, Ireland, citing the need to protect it from “global warming and its effects.”