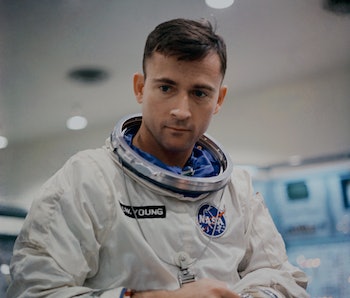 American astronaut John Young, 87, died on Saturday, after a career of many firsts: first man to fly in space six times, pilot of the first Gemini mission, commander of the first shuttle flight, and humorously, becoming the first man to fart on the moon.

That last achievement might have been less glorious, but it was certainly the most humanizing.

On the twelve-day Apollo 16 mission in 1972, during which he spent 71 hours on the surface of the moon, Commander Young had a colorful exchange with Lunar Module Pilot Charlie Duke that he didn’t realize was being broadcast on NASA’s public channel.

Young: I have the farts, again. I got them again, Charlie. I don’t know what the hell gives them to me. Certainly not…I think it’s acid stomach. I really do.

Duke: It probably is.

Young: (Laughing) I mean, I haven’t eaten this much citrus fruit in 20 years! And I’ll tell you one thing, in another 12 fucking days, I ain’t never eating any more. And if they offer to sup(plement) me potassium with my breakfast, I’m going to throw up! (Pause) I like an occasional orange. Really do. (Laughs) But I’ll be durned if I’m going to be buried in oranges.

The extra citrus that caused this flatulence was incorporated into the astronauts’ diets in response to the irregular heartbeats that his predecessors had experienced on the Apollo 15 mission. NASA’s flight surgeon determined that it was caused by a potassium deficiency, sending the next crew up with potassium-fortified fruit drinks, including a lot of orange juice.

While it might have been an embarrassing moment for Young, flatulence in space was actually a serious topic of study. Three years before his moon-farting incident, nutritionists Doris H. Calloway and Edwin L. Murphy published a paper on how “space diets”, specifically the one followed on the Gemini missions (in which Young participated), affected astronaut’s internal buildup of hydrogen and methane.

Young worked for NASA until his retirement in 2004, with an impressive 15,000 hours in flight over the course of his four decades in service.

Some of his many other accomplishments (both serious and not-so-serious) include the time that he snuck a corn-beef sandwich onto the Gemini 3 mission, which was meant to test space food, getting him into serious trouble with Congress; when he flew around the moon by himself during the Apollo 7 mission; and when he saved the lives of three astronauts on board Apollo 13, including his own, by literally figuring out how to put a square peg in a round hole.

Though Young knew how to make light of any situation, he was also highly dependable and professional. When asked if she was afraid in the moments before launch, fellow astronaut Sally Ride would paraphrase Young: “If you show me a person who’s not a little nervous before launch, I’ll show you a person I wouldn’t want to get into the same room with.”