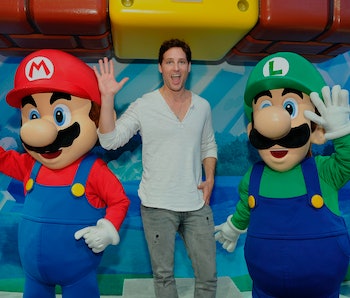 E3 2015 will be remembered as the year virtual reality became reality. Of course, that is dependent on Oculus and Project Morpheus succeeding in the marketplace, and gaming giant Nintendo is skeptical. Maybe because they’ve done it already and failed, or maybe because it no longer fits their ethos, or both.

“We have knowledge of the technical space, and we’ve been experimenting with this for a long, long time,” Fils-Aimé said, alluding to Nintendo’s Virtual Boy from 1995. “[I]n order for this technology to move forward, you need to make it fun and you need to make it social.”

It might be regressive for a gaming company to avoid investing in tech, but Nintendo at least knows of what it speaks. The Virtual Boy, Nintendo’s attempt at virtual reality, was a disaster.

Fils-Aimé isn’t so wrong about virtual reality either. VR gaming is largely a solo experience; no one can physically share the tin cans that Oculus and Morpheus require users to wear. Compare that to the Wii, which had immense space for social interaction that allowed it to become the monster success it was. The form is in its infancy and Nintendo — still licking wounds from the Wii U’s dismal sales — are understandably cautious.

But are they unwilling to take up the challenge? Fils-Aimé said himself that the tech has to move forward, and needs to be made fun. Nintendo made flailing your arms in front of your TV lots of fun, so why not pursue VR gaming again? Why not a Virtual Boy 2 now that the technology has finally caught up with the vision (no pun intended)?

Nintendo bashing VR comes off as a salty grudge. Microsoft and Sony wowed E3 with impressive virtual reality wares like rich kids with tricked-out bikes, making us hyped as we look towards their future. Nintendo bored everyone with puppets. “I haven’t walked the floor, so I can’t say in terms of what’s on the floor today,” said Fils-Aimé, “but at least based on what I’ve seen to date, it’s not fun, and it’s not social. It’s just tech.”

Quite alarming for a gaming company that used to pride itself on innovation to shrug off something as “just tech.” If VR plays a part in the future of games, as it appears certain to, this might be remembered as the year Nintendo ceded some major ground to Sony and Microsoft.

More like this
Gear
Jan. 23, 2023
Why Microsoft thinks ChatGPT (and not the metaverse) is its future
By Ian Carlos Campbell
Gear
Feb. 1, 2023
Samsung Can’t Resist the Call of the Metaverse
By James Pero
Innovation
Jan. 25, 2023
Starship orbital flight: SpaceX successfully loaded the rocket with over 10 million pounds of propellant
By Mike Brown and Molly Glick
LEARN SOMETHING NEW EVERY DAY.
Share: