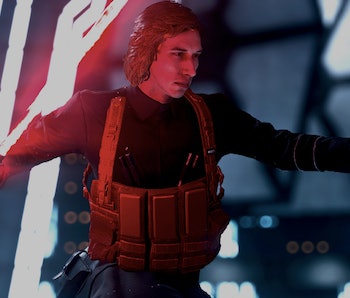 We heard Kylo Ren has an eight-pack. We saw Kylo Ren in the shower and he was shredded. And now, the best version of Kylo Ren — Matt the Radar Technician — is a playable character in Star Wars: Battlefront II. Here’s how to get the mod.

On Thursday, news broke that gamers created a way for you to play as “Matt” in Star Wars: Battlefront II. For those who are confused, “Matt the Radar Technician” was a false identity Kylo Ren assumed in the 2015 SNL sketch “Undercover Bosses: Starkiller Base.” Though the sketch isn’t considered real Star Wars canon, it totally should be, as Driver’s Kylo Ren seems angsty and insecure about what people think about him, just like in the actual Star Wars movies.

So, how do you play as Matt in Battlefront II? There are two ways:

For Arcade mode, you head over to Nexusmods and download the new skin for Kylo Ren.

For the “Fire Saber” version of Matt, head over to Media Fire.

To be clear, it looks like both versions only work in Arcade Mode. Plus, at present, these mods only work for the PC version of Battlefront II, meaning if you’re playing on XBox or any other console version of the game, you’ll have to do without Matt, for now.

Thought Battlefront II has forever altered the Star Wars canon in numerous ways — including a solid explanation of how Luke found the first Jedi temple — it’s hard to imagine anything being more significant than a formal introduction of “Matt” into the legit canon. Though this mod is currently fan-made, it really should be a clear signal to the Lucasfilm Story Group: the people have spoken, and they want Matt.

Read Next: How Did Poe Know What to Do at the Beginning of The Last Jedi? It’s Actually Explained in *Battlefront II.*