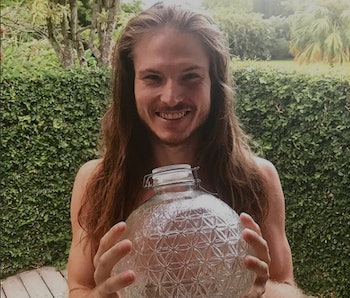 Last week, the New York Times published a disturbing story about a rapidly growing industry centered around a product called “raw water.” One variety of this unfiltered water comes in 2.5-lb glass containers, and sells for $36.99, plus $14.99 per refill. If it sounds like the brainchild of some Burning Man-going Silicon Valley guy, that’s because, basically, it is.

Now, a microbiologist tells Inverse that the “raw water” craze is not only putting drinkers at risk — it stokes unnecessary fears about the water supply in order to sell products.

Mukhande Singh (née Christopher Sanborn), is the founder of one such company that sells unfiltered spring water — it’s called Live Water. According to Singh, other kinds of water are toxic and can’t be trusted by the public. He sees his product as a healthy alternative. Per the Times:

Despite all its pseudo-hippie posturing, Live Water’s social media — particularly its Instagram — really doubles down on the scare tactics.

“Your tap water is polluted with harmful toxins,” one Instagram post from July 2, 2016 reads. “The vibration of the water is distorted and dis harmonic. No need to go into further detail. Most bottled water companies also put trace amounts of toxins in the water.” Again, there’s literally no evidence for this — or that water can even be qualified as “disharmonic.”

Kent State University microbiologist Tara C. Smith says raw water is far from a safe alternative to filtered water, no matter what its “vibes” may be.

“Depending on its source, it could have all sorts of bacteria, viruses, or parasites within,” she tells Inverse. “In municipal drinking systems, these are typically eliminated in one of two ways (or often, both): using chlorination to kill most of the bacteria/viruses, and filtration to physically eliminate other pathogens that might not be sensitive to chlorine (like some parasites that can form cysts).”

Live Water proudly markets its product as being anti…something. It’s clear that there’s an inherent distrust for Big Water, or whoever they think is poisoning drinking water with birth control pills. After a while, it gets hard to keep up with the conspiracies.

“Drinking ‘raw’ stream water might sound like one of those cool ‘back to nature’ things, but there’s a reason most campers and hikers either bring their own water or carry a filter or water purifier with them,” Smith adds. “It’s because they don’t want to spend days on the trail with diarrhea from E. coli, Campylobacter, Giardia, Salmonella, and many others.”

In some cases, of course, drinking water is not safe for consumption — take the Flint water crisis, for example. Even though water quality finally was deemed safe again in early 2017, Flint residents are still being asked to rely on bottled water for their everyday needs until all the city’s lead pipes have been replaced.

Still, that’s a remarkably different situation from people in Silicon Valley looking for an alternative to their already safe water. Did we mention Doug Evans, founder of the ill-fated Juicero, is now one of raw water’s biggest proponents? Life comes at you fast.

“Overall, our municipal water system is very safe and effective,” Smith explains. “But there are many out there who buy into conspiracy theories about it, such as ‘fluoride in our water is a mind-control device/is toxic waste/causes cancer,’ or there are those who have very real concerns about places like Flint that they then extrapolate to “their water is unsafe, so tap water everywhere must be unsafe, so untreated water must be better.”

Bottled water companies aren’t trying to kill you. They do, however, want your money. Then again, so does Live Water and all the other “raw water’ brands out there. Please don’t give your money to the people who are trying to sell you something unsafe.

That’s all. Thank you.

More like this
Science
11 hours ago
How the Moon formed and more: Understand the world through 8 images
By Robin Bea
Science
Oct. 1, 2022
Is the Covid-19 pandemic over? Experts share their predictions for 2023
By William Hauk, Lisa Miller, Wayne Au and The Conversation
Science
Sep. 22, 2022
Can science prevent a pandemic?
By Tara Yarlagadda
Related Tags
Share: