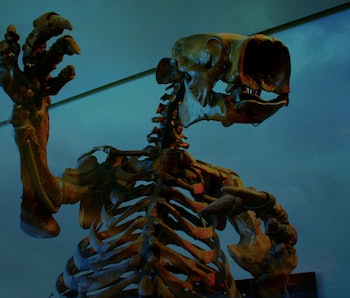 Millennials lost out on their chance to buy houses because of ancient giant sloths who spent their days chilling and pooping out avocado pits, suggest scientists. These big, slow boys went extinct thousands of years ago, but their legacy lives on via the continued existence of the hefty green single-seed berries, which were dined on by the Lestodon during the early Cenozoic era, long before they were smeared all over overpriced toast.

This fun fact was pointed out Tuesday by the American Museum of Natural History on its Tumblr:

“Next time you eat guacamole, thank a giant ground sloth — like the Lestodon! These 15-foot animals ate avocados whole, traveled, then pooped, depositing the pits in the new places. Most mammals couldn’t handle large seeds, so it was up to the giant sloths and other megafauna to disperse (and fertilize!) avocados. Giant ground sloths went extinct about 13,000 years ago, but the avocado lives on.”

While today there are six, much smaller, species of sloths still slowly roaming the Earth, the Americas were once home to a variety of large ground sloths — including the Lestodon, the Megatherium, and the Eremotherium. Our avocado-eating friend, the Lestodon, is considered an “armored animal” because it had bony plates buried under its skin. It’s hypothesized that at the same time these megafauna were munching on avocados, early humans learned to munch on them as well.

In 2013 Connie Barlow, author of The Ghosts of Evolution: Nonsensical Fruit, Missing Partners, and Other Ecological Anachronisms, told Smithsonian that if it wasn’t for large mammals like the ground sloth, “the avocado seeds would rot where they’ve fallen and must compete with the parent tree for light and growth.” It could have been big trouble for the avocado when the megafauna that dispersed its seeds died out, but luckily for us, prehistoric Aztec farmers began to cultivate it as a crop. They named the fruit ahuacatl, which means testicle.

While the rise of the avocado’s popularity now means bad news for the forests of Mexico being plowed down to plant avocado trees, its continued cultivation by farmers is the reason why it still exists today. Modern sloths only poop once a week — and our incessant demand for guac is far too high for their defecation rates to keep up.

More like this
Science
6.22.2022 8:26 PM
Yes, there are mites living on your face — and they can poop, a new study finds
By Allison Parshall
Science
6.21.2022 10:45 AM
Ancient stalagmites point to a massive drought that upturned 6th century Arabia
By Allison Parshall
Science
6.14.2022 11:00 AM
200,000 years ago, ancient humans developed language — what did they say?
By Mark Pagel and The Conversation
Related Tags
Share: