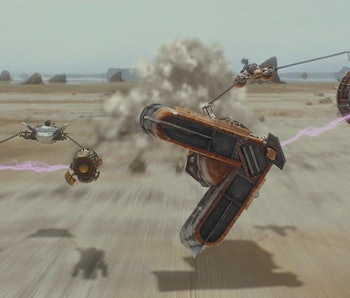 A short time ago, in a galaxy south of the Mason-Dixon line, former child actor and budding Sith Lord Jake Lloyd was arrested for leading Charleston, South Carolina police on a 24-mile podrace-like chase into another county that ended with the now-26-year-old Padawan crashing into some trees along Interstate 95. There’s unfortunately no word on whether Sebulba was involved in the incident, and Mos Espa junk dealer and slave trader Watto couldn’t be reached for comment.

Lloyd previously appeared as a young Anakin Skywalker in Star Wars Episode I: The Phantom Menace, though he hasn’t appeared onscreen in a film in the past 10 years.

Lloyd apparently attempted some Jedi mind tricks: He told officers his name was “Jake Broadbent” before taking off on speeds in excess of 100 mph. Lloyd was eventually charged with reckless driving and failing to stop for officers. That’s just what happens when you try to lose the force.

Inverse has obtained a visual approximation of the events in question. Please remember, many Bothans died to bring us this information:

The young Padawan has yet to post bond after the incident last Wednesday and remained in jail as of Sunday, the worst Father’s Day ever for Luke and Leia. Though if his powers are still strong, Lloyd could likely break out of jail using the powers of the Force and flee in his Imperial Super Star Destroyer with the help of Emperor Palpatine.