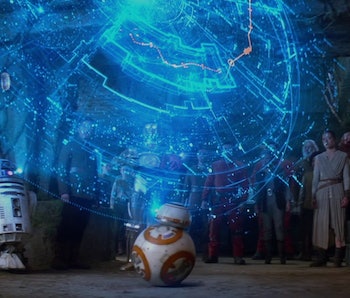 As the primary MacGuffin of The Force Awakens the map to Luke Skywalker is both elegant and maddening. And now, for those who can’t stop thinking about it, there’s a new wrinkle. If you head to the store right now and grab a box of Cheerios, you’ll not only get a special Star Wars cereal spoon, but you’ll also obtain a bewildering piece of trivia: R2-D2 got his piece of the map to Luke Skywalker on the First Death Star.

As of November 2017, Star Wars-themed General Mills cereal boxes contain special Last Jedi spoons and Star Wars trivia. And one of the questions asks “Where did R2-D2 obtain his portion of the map that led Rey to Luke Skywalker?” Great question! And apparently, whoever is in charge of the trivia at Cheerios thinks R2-D2 snagged that data on the very first Death Star, over three decades before the little droid would even suspect he’d need a secret star chart later. Everyone knows R2-D2 has a super-long memory and is the craftiest droid in the galaxy. But, apparently, he’s extremely prescient now, to the point of being clairvoyant. How does this make any sense?

The idea for R2-D2 having the location for a Jedi temple didn’t originate with the back of Cheerios box. In a 2015 interview with Entertainment Weekly, original Force Awakens screenwriter Michael Arndt said this: “We had the idea about R2 plugging into the information base of the Death Star, and that’s how he was able to get the full map and find where the Jedi temples are.” So, assuming this trivia answer isn’t a mistake, and Ardnt’s idea is now real Star Wars canon, let’s talk about how R2-D2 had the map to Luke Skywalker sitting in his memory banks for 34 years. Here’s how it all works.

First of all, the map to Luke Skywalker isn’t a map to Luke Skywalker, it’s map to the first Jedi Temple on the planet Ahch-to. In The Force Awakens, Han mentions Luke went looking for the First Jedi temple, which implies most people in the contemporary galaxy had no idea where said temple was located. Then, when BB-8 brings his piece of the map to Leia, C-3PO says the map is only “partially complete” and that “it matches no charted system on record.” This can mean only one thing: the map to Ahch-to is kind of like the “map with no names” from Indiana Jones and the Last Crusade. Basically, the piece BB-8 shows has a planet located in a certain kind of star system, but without the context of where that map fits in with the rest of the galaxy, it could be just about anywhere.

If we apply contemporary theories about astronomy to mapping the Star Wars galaxy, we arrive at one reality. Even if you could travel several times the speed of light, getting an objective view of an entire galaxy is hard. In 2015, NASA described mapping our own Milky Way galaxy as “trying to create a map of your house while confined to only the living room.” In Star Wars, people have clearly had more time to map their galaxy than we have with ours. But still, getting a piece of a star chart without the context of where it fits into the rest of everything else would be pretty useless. Plus, apparently Luke didn’t have a map either, and had to use a magic compass to find the planet in the first place.

Infamously, the physics of hyperspace travel in Star Wars are dicey when applied to real physics, but if we stick just to in-universe constraints, we find another reason why you might need a map, other than for coordinates. In A New Hope, Han outlines the dangers of hyperspace travel, saying that “without precise calculations, we’d fly right through a star or bounce to close to a supernova.” When you throw dark matter and a bunch of other outer space unknowns into the mix, space travel of this variety wouldn’t just require a map to let you know where something was relative to something else, but also tell you the safest way to get there. This concept is corroborated by Kylo Ren in The Force Awakens when he calls the map a “navigation chart.”

So, what does all of this have to do with a box of cereal and the Death Star? Well, information is notoriously hard to hold onto in the Star Wars galaxy. This is true of everything from “myths” about Luke Skywalker, to the basic cartography of local star systems. Kylo Ren tells Rey that he has the rest of the map “from the archives of the Empire,” which is where this new R2-D2 twist fits in. When R2-D2 was jacked into the Death Star computer in A New Hope, it’s totally possible he downloaded a bunch of useful data, including tons of maps and navigational charts. In other words, R2-D2 unwittingly downloaded the larger context which subsumes the Ahch-To fragment Poe and BB-8 get way later. This means R2 has the same part of the map as Kylo Ren, and they both got it from the archives of the Empire.

Which means, yes. A box of Cheerios probably speaks the truth. R2-D2 did get some very useful data, probably because he just had a good habit of copying anything that looked remotely useful when he interfaced with a computer. In The Empire Strikes Back, C-3PO told R2-D2 to “never trust a strange computer,” but it looks like because R2 did exactly that, he gave the good guys a silver bullet, just waiting to be used years and years later.

The Last Jedi is out in wide release now.