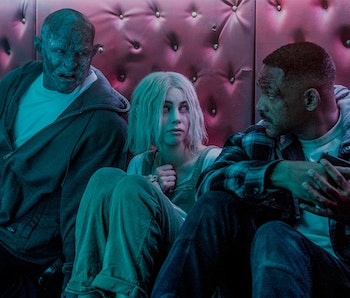 It never felt likely that critics would be too hot on Netflix’s multi-genre action-fantasy buddy cop flick Bright. No matter your thoughts on whether or not Bright was good, it’s important to note that most film critics have very little context for the urban fantasy film — and it’s not even their fault.

Bright, Netflix’s first real attempt at a blockbuster-style action movie, is a critical flop. As of Thursday — just a week after its release — Bright sat at a 27 percent critical approval rating on Rotten Tomatoes, the critical consensus being, “Bright tries to blend fantasy, hard-hitting cop drama, and social commentary — and ends up falling painfully short of the mark on all three fronts.”

Meanwhile, the audience score sits at an 89 percent approval rating, taking into account over 11,000 people’s opinions on the film in comparison to the 66 official reviewers. This kind of disparity between reviewers and average joes isn’t exactly a new phenomenon, especially taking into account the kind of attention writer/director David Ayer’s last big project, Suicide Squad, garnered.

Behind the 89 percent approval rating from audiences is this stat from Nielsen, the longtime TV ratings service that began tracking Netflix viewership this past fall: An estimated 11 million people people watched Bright in the three days since it was posted on Netflix at 3 a.m. Eastern on Friday, TechCrunch reports. Netflix doesn’t release viewership stats and says its numbers are typically higher than Nielsen. To put it another way, 11 million multiplied by $8.65 — the average movie ticket price in America — is $951.5 million, which would be a hell of an opening weekend, on par with Fate of the Furious and Justice League.

While there are debates to be had about Suicide Squad, it and Bright fall into a tried-and-true pattern: audiences like fantasy more than critics. Shocking, right?

The mid-2000s superhero blockbuster boom that has since morphed into the billion-dollar, record-breaking set of franchises that it is today saw a similar problem at first. How were filmmakers supposed to sell spandex and transparent allegories about good and evil to both critical reviewers and general audiences? Spider-Man (2002) was simple; Peter Parker is about as purely good as a superhero can get. Batman Begins (2005) complicated the good-versus-evil narrative as Batman always has, the film’s villains wreathed in toxic smoke and grand dreams of genocide as its black-clad hero angsted over his tragic backstory.

The Marvel Cinematic Universe has since complicated the superhero movie. But a decades-worth of MCU movies has lent each subsequent film with a more convoluted message and the kind of character building a singular film just can’t accomplish on its own.

Critics warmed to superhero movies as they figured out how to talk about them and what, exactly, we should be expecting from a truly good superhero film. Urban fantasy films have yet to find that footing.

Suicide Squad walks the line between the “urban fantasy” and “superhero” genres. Bright is urban fantasy in its purest form; magic takes on a gritty quality, race relation metaphors are painfully obvious, and quippy one-liners — “Fairy lives don’t matter today” — do most of the work in blending the story’s fantastical elements with the real world. The MCU’s Iron Man (2008) was remarkably similar, blending action with comedy and tech so revolutionary that it could be considered magic. Yes, it did receive overwhelmingly positive reviews, but there was very little vocabulary for how to talk about a good superhero movie.

Bright is now available on Netflix.

More like this
Culture
12 hours ago
8 thrilling sci-fi movies and shows new on HBO Max and Netflix in October 2022
By Robin Bea
Culture
Sep. 20, 2022
5 amazing sci-fi shows and movies leaving Netflix in September 2022
By Robin Bea
Culture
Sep. 17, 2022
You need to watch the most realistic apocalypse movie of the century on Netflix ASAP
By Jake Kleinman
Related Tags
Share: