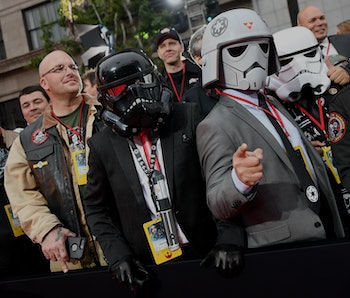 Some people think fear and anger leads to the dark side, but they often forget about rampant, knee-jerk ignorance. It appears, some people who saw Star Wars: The Last Jedi actually didn’t understand one artistic decision made with the film’s editing, and assumed, wrongly it was a technical error.

On Tuesday, Vulture reported on a widely-circulated story that at least a handful of AMC movie theaters across the US was forced to tape-up hastily made signs to warn moviegoers that there is in fact a brief scene in The Last Jedi which intentionally has zero sound.

The scene that has caused this uproar, happens toward the end of the film and involves Admiral Holdo (Laura Dern) jumping a giant Republic starship into hyperdrive for a short distance in order to ram it into a giant First Order ship. It’s a badass scene and some physicists even have suggested (with some caveats) that there’s something scientifically viable in it.

Thinking about the science of space travel is relevant in this scene for another reason, too. Unlike most space sequences that happen in Star Wars movies, this one intentionally features no sound, which is, briefly, scientifically accurate. Space is a vacuum, which means you wouldn’t hear sounds the way you do in an environment with an atmosphere. This is also why the tagline for Alien in 1979 was “In space, no one can hear your scream.”

Sadly, for now, it seems as though the only screams you’ll hear in some screenings of The Last Jedi, are the voices of people who wrongly assume that all projectionists are too incompetent to make sure the soundtrack is matching up with the film they’re showing. Which is a shame. Because with all the controversy surrounding people’s reactions to The Last Jedi, worrying about cool artistic choices might be the biggest waste of anyone’s time yet.

People who work at movie theaters have thankless jobs. Let’s be nice to them over the holiday and throughout the whole new year.