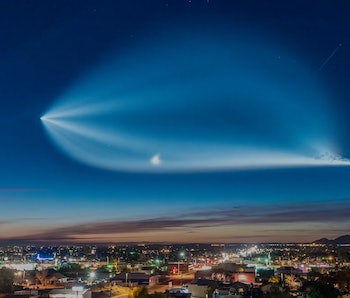 On December 22, Elon Musk scared the ever-loving hell out of onlookers when SpaceX launched a Falcon 9 from the Vandenberg Air Force base in southern California. But a new time lapse from photographer Jesse Watson shows the scene in spectacular detail — and it’s worth watching again and again.

As Inverse previously reported, the Falcon 9 launched last Friday about 5:30 p.m. Pacific. The evening sky provided a perfect backdrop for the launch, causing the rocket’s exhaust to appear almost ghostly or alien-like to viewers across the southwestern U.S.

Watson viewed the launch from his hometown of Yuma, Arizona, and shot with a Nikon D810 and a wide-angle lens, according to photography website Fstoppers.

“The initial shoot comprised of 2,452 images which were then culled to 1,315 images for the final project and edited in Adobe After Effects and Adobe Premiere Pro,” the outlet reports. The result is nothing short of spectacular.

After streaking across the night sky, the Falcon 9 landed in the Pacific Ocean. According to SpaceflightNow, the rocket added “10 new satellites to Iridium’s upgraded communications network.”

Overall, the light show was a major success, marking SpaceX’s 18th launch of 2017. This was the aerospace company’s last mission for the year — but in early 2018, it’ll launch its much-anticipated Falcon Heavy.

For now, we can just stare in awe at this Falcon 9 video. I mean, seriously, it’s really that good.