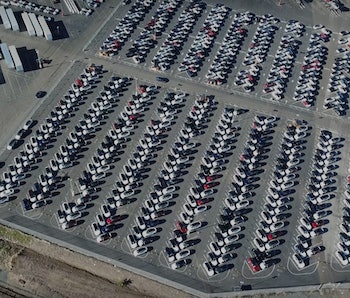 The Tesla Model 3 is on its way to the general public, and new drone footage captured Wednesday shows how the automaker is kicking production into high gear. Elon Musk’s $35,000 car, which launched this July, brings the company’s electric vehicle technology to a wider audience thanks to a lower price. Drone footage of Tesla’s Fremont, California, plant shows the work in action.

“Flew over the Model 3 buffer visible from the freeway,” said Reddit user darksoldier360, who uploaded the drone footage to YouTube. “Also flew over the Model S/X buffer at the back of the factory. Rail line is torn up/not in service […] Also there is a yard with some prototypes or training vehicles or something under wraps and out in the open in one of the shots.”

Tesla has been working hard to get the Model 3 out of a stage Musk refers to as “production hell.” While the company overall produced around 26,150 cars in the third quarter of 2017, the company has a lofty goal of ramping up to a rate of 10,000 cars per week at some point next year. However, Tesla’s plan to produce 100 Model 3 vehicles in August, followed by 1,500 in September, hit a speed bump when it only produced 260 in September. In October, Musk shared a video of the production robots moving at one tenth of their maximum speed.

The Fremont plant is working alongside the Gigafactory, an under-construction factory in the Nevada desert, to get the Model 3 into consumers’ hands. Watch the Fremont flyover, filmed in 4K with a Mavic Pro drone, here.

There are signs that the Model 3 production rate is improving. A Taiwanese report translated by Electrek last week said that while Tesla slashed its Model 3 component orders in October with Hota Industrial Mfg. Co by 40 percent, the company this month ramped the order back up to its original rate of 5,000 units per week. The report claims that other Taiwanese suppliers have seen orders increase, suggesting Tesla is moving past its September setback.

Reports are slowly coming out of prospective buyers, who had to place a $1,000 deposit to reserve their car, receiving invites to customize their vehicle and place their final order. Last week, Tesla helped a man dying of cancer fulfill one of his final wishes by shipping his Model 3 early. Although the past few months have been a tough ride for Tesla, the company may soon find itself over the hardest part.