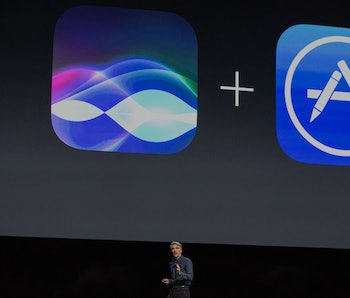 Rumors of Apple’s plans to combine iPhone, iPad and Mac Apps’ development have iOS engineers excited — and that could also mean big, changes for what consumers get out of their favorite apps.

According to a news report, software developers would be allowed to design one uniform app that works with both Apple’s iOS touchscreen and the Mac’s mouse or trackpad. The same app could work using a single set of code on iPhones, iPads, and Apple computers.

By potentially allowing mobile developers to expand from iOS coding to Mac, this could help revive the largely stagnant development of Mac-specific apps, according to several developers who spoke about the rumor with Inverse.

Arthur A. Sabintsev, a lead iOS developer at Arc Publishing, which includes programming The Washington Post’s iOS app, says that the news could be a major shift for self-taught engineers like himself.

“I’ve only done iOS for the past six years,” Sabintsev tells Inverse. “It’s nice to be able to expand into another Apple platforms without having to learn it from scratch.”

This is especially true when, in some cases, mobile-only isn’t ideal for a product that also needs a robust Mac app. It might signal a step in the right direction for using Swift, the Apple-native programming language, across all platforms.

On the technical side, macOS is built on NeXT, which was released back in 1988, explains Sam Soffes, an iOS developer and designer at Lyft.

To make a Mac app, programmers must use AppKit, which comes from NeXT. That’s fairly difficult, especially compared to iOS, due to the rapidly-aging software.

“Right now if you want to have an app on both, you can’t share any of the UI,” Soffes says. For example, his independent app Redacted for Mac shares its core image with iOS, but all of the UI, or user interface, had to be written for each platform. That’s a laborious, time-consuming process, and not all developers bother to do both.

Kyle Bashour, who recently worked on an iOS app for a popular video chat platform, notes that most small companies and indie developers would love to offer a Mac app but usually don’t have the time or resources.

“The ability to run iOS apps on macOS will be a huge win for startups,” Bashour tells Inverse. “At a startup, especially a young one, you’re almost always laser-focused on growth. When you’re quickly iterating on features, having yet another platform to write those features for can really slow you down.”

This typically leaves startups with two options: Build a cross-platform app using a framework like Electron, or build a native app for the platforms with the most users. In this case, that’s typically iOS.

Simon Ljungberg, a Sweden-based iOS programmer for the recipe app Filibaba, agrees that the prospect of writing Mac apps without dealing with AppKit would be exciting. Not just for developers, but also for Apple users.

“In the long term, when our Meal Plan app becomes more full-fledged, I can see this being useful on the Mac,” Ljungberg says. For example, editing and planning weekly meal plans and curating shopping lists might benefit from the power of the Mac.

As for Mac users, the lower cost of apps and the seamlessness due to shared code between iOS and macOS would make for a big perk.

But there are developers who aren’t holding their breath for the so-called macOS savior.

“Without an official press release from Apple, we should take the rumor with a pinch of salt,” England-based freelance iOS Developer Rehat Kathuria tells Inverse.

The engineer, who’s worked on apps like ECB Cricket and Notarize, says there will be lots of opinions on this potential technology as more details are released in the coming weeks.

As Kathuria puts it: “I’d love to see UIKit work on macOS, but I’m not sure how much of a far-fetched dream that [is].”

More like this
Innovation
5.7.2022 12:00 AM
The 5 best iPhone battery cases
By Masha Vapnitchnaia
Innovation
5.8.2022 12:30 PM
How the new Large Hadron Collider experiments could change physics forever
By Sarah Wells
Innovation
5.13.2022 11:00 AM
These robots have one special skill that could make human chefs obsolete
By Sascha Brodsky
Related Tags
Share: