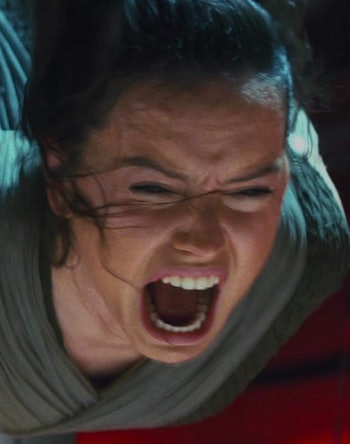 If anyone is suspicious that actress Daisy Ridley might really possess the power of the Force in real life, then you’re probably right. For one huge scene in Star Wars: The Last Jedi, Ridley was suspended on wires high above Supreme Leader Snoke and Kylo Ren. In other words, the Dark Side doesn’t use CGI to Force-throw people in the air, and Snoke’s Throne Room is mostly a practical special effect.

On December 15, Inverse spoke to Rick Heinrichs, the production designer of The Last Jedi. In addition to talking about Luke’s connection to The Big Lebowski, Heinrichs also revealed everything that was going on in one very pivotal scene in the film. That’s right, we’re talking about everything that went down in Supreme Leader Snoke’s throne room.

As Heinrichs reveals, essentially everything that you see in the big throne room scene is real, including what happens to Daisy Ridley. And the inspirations for the art design of the throne room itself go all the way back to the ‘80s.

Spoilers ahead for Star Wars: The Last Jedi.

“It was kind of an elegant version of Hell.” — Rick Heinrichs, production designer, Star Wars: The Last Jedi

Heinrichs emphasizes that the minimalist design and feeling for Snoke’s blood-red throne room was taken from older concept art created for the original Star Wars trilogy. “We wanted it to have that sense of stature. And the main thing in the throne room was one of the pieces of inspiration that we looked way back to was an original image from the classic trilogy. At that time it was Darth Vader’s throne room, which has never been seen in the movie. Really, not in the sense of a throne room anyway. That ended up being more used essentially for the Emperor in Return of the Jedi. It’s like there are the flames of hell and he’s in an almost a medieval castle. But the essential, metaphorical inspiration of [Snoke’s throne room] I took from it was kind of an elegant version of Hell, if you will.”

Because so much happens in Snoke’s throne room in the film, it would be easy for fans to assume that a lot of the action was completed using post-production techniques such as CGI. But Heinrichs says this wasn’t the case at all. “I know that audiences never can quite tell what’s a post-production visual effect and what a practical set element is, for instance, in movies today,” he says. “And that’s a quite acceptable situation. You never want them really to be aware of set extensions or anything like that, anything that takes you out of the story to wonder how they did it. But on that particular set, everything’s pretty much what you see on the screen of what we built.”

But, like so many big rooms in spaceships in science fiction films, this set didn’t have a roof. And that’s because the top of the set is where the crew had to rig up the wires that would suspend Daisy Ridley into the air.

“At the top of the set where we had a very complicated lighting and wirework apparatus,” Heinrichs says. “There were layers of machinery up there of lighting that had to be able to drop down to the floor to be adjusted, and a separate layer of stunt equipment, wire motors. For instance, when Rey is thrown up into the air, she’s actually literally in the air by a four-point stunt engine system.”

Heinrichs also wants fans to know that the massive amounts of red in The Last Jedi was an intentional decision on the part of director Rian Johnson. But, he doesn’t necessarily think it was all red for the sake of it just being red. Instead, he suggests that the color red in The Last Jedi might suggest a different color, at least thematically.

“You have an essential dichotomy in the conflict between good versus evil here,” Heinrichs says. “I think that what Rian has done is he’s allowed a lot more of degrees of grayness in between all the red. And his use of red here, it does have precedent in previous Star Wars films, but it’s used very sparingly. And we tried to use it sparingly, as well, but we did want to make it very purposeful within the story. But, it does have a narrative aspect to it. That color helps tell the story.”

Star Wars: The Last Jedi is out now in wide release.

Read Next: Rian Johnson Reveals Why Twists in ‘The Last Jedi’ Aren’t Twists