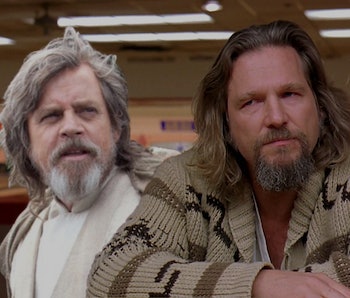 As Star Wars fans debate the merits of The Last Jedi, contemplate the future of the franchise, and compare the latest episode with the previous film in the series, there’s one part of the conversation everyone has bizarrely over-looked. Luke Skywalker has very clearly become “the Dude” from the seminal Coen Brothers’ classic, The Big Lebowski. And this isn’t some random comparison. The production designer on The Last Jedi, Rick Heinrichs, was also the production designer on The Big Lebowski. And he thinks a connection between Jeff Bridges’s Dude and Mark Hamill’s Luke isn’t that far off.

On December 15, Inverse spoke to Heinrichs on the phone about all things Last Jedi, and specifically, if he found a correlational between Luke Skywalker’s laid-back attitude in the film and the chilled out eponymous Dude from The Big Lebowski.

“I think of Luke Skywalker as a lot more circumspect than the Dude, who seems very oblivious,” Heinrichs said. “But, I do think that there is a little bit of a slacker aspect to the fact that Luke has really set himself aside from society and really just wants to be the hermit on the top of the mountain on the island away from everybody and everything that can create complications for him. You can imagine that there are crumbs of food in his beard.”

In The Big Lebowski, the Dude is drawn into a complicated ransom kerfuffle, completely against his wishes. All the Dude wants to do in the film is drink his White Russians and be left alone. In The Last Jedi, Luke “the Dude” Skywalker is dawn into a creepy budding friendship which he wants no part of, and just wants to drink his Green Alien Milk and be left alone. Both have giant beards and both seek a totally chilled-out lifestyle.

But Heinrichs says that’s not the only reference to the films of the Coen Brothers found in The Last Jedi. “Actually, I thought what you were gonna say the speeders on the mineral planet [Crait] are sort of the like wood chipper scene in Fargo.”

In Fargo, a pivotal scene involves a body being fed into a woodchipper, which covers the surrounding snow red with blood. The Last Jedi, speeders on Crait aren’t creating a trail of red because of blood. Instead, that’s a reaction to the salty minerals on the planet’s surface. Still, it seems like if there was a world in which Rick Heinrichs hadn’t worked with the Coen brothers, The Last Jedi would have turned out very, very different.

The Last Jedi is out now.

Read Next: How the Porg Master of ‘The Last Jedi’ Weaponizes Cuteness