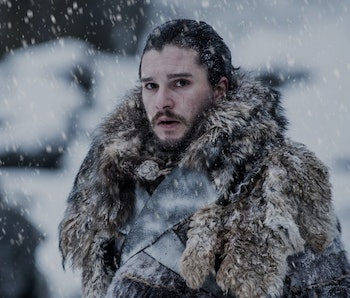 Westeros will be a very different place when the final season of Game of Thrones premieres. And as fans prepare for the finale of one of the most record-shattering shows in history, they should probably get ready for some insane storytelling, big change-ups, and a truly incredible ending.

Jon Snow actor Kit Harrington talked Game of Thrones with Time in an interview published Friday. While the majority of the interview focused on Harrington’s new show Gunpowder, the conversation did inevitably turn to the final season of Game of Thrones.

When asked whether or not the reality of the end was sinking in yet, Harrington said: “It’s a lot of—it’s just bigger than it’s ever been! It is sinking in, it’s just quite emotional. I don’t know how I’m going to feel sometime next year when I’ve finished. It’s quite a sudden shift, I guess, but it feels like the right time.”

It should come as no surprise to Game of Thrones fans that the final season of HBO’s epic fantasy series will be, well, epic. Season 8 will reportedly consist of just six episodes, making it the shortest Thrones season to date and easily the most action-packed. While the season doesn’t have an official premiere date, yet, Sansa Stark actress Sophie Turner hinted that Season 8 will premiere sometime in 2019.

Adding to the Season 8 fervor is Samwell Tarly actor John Bradley, who told TV Guide in an interview published Tuesday that everything will change in Season 8.

“Each of the characters this year is placed in a completely alien environment at some point in the season that they’ve never been placed in before,” Bradley said. “The thrill is seeing how they react to it and how they respond… This season, I think, more than any other is stretching these characters.”

If Daenerys gets pregnant, how genetically screwed up will her kids be? Check out this video to find out.