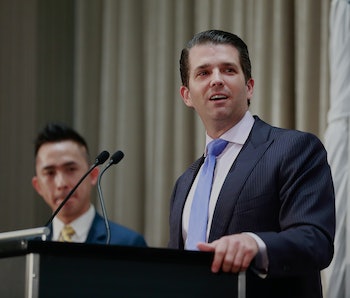 Thanks, Obama. It seems that Thursday’s vote to repeal net neutrality rules had something to do with the former Democratic president, despite the fact that President Donald Trump picked Ajit Pai to head up the Federal Communications Commission just two days after taking office. At least, that’s what Trump’s son appears to believe.

In a Twitter post on Friday, Donald Trump Jr. criticized people complaining about “Obama’s FCC chairman” voting to repeal what he referred to as net “neutality.” He also “bet most hadn’t heard of it before this week.”

Obama appointed two chairman of the commission under his presidency, neither of which were Pai. The first, Julius Genachowski, passed a rule in 2010 that ensured access to legal web content for home internet users, the first net neutrality rules. Under Tom Wheeler, Obama’s second chairman appointment, the commission went further in 2015 by classifying internet providers under “Title II” telecommunications regulations, strengthening the existing rules. Pai was appointed as a commissioner by Obama in 2012.

Trump Jr. obfuscates the reality that his father made Pai chairman though:

Trump has not made any attempt to hide his disdain for net neutrality rules. In 2014, he described “Obama’s attack on the internet” as a “top down power grab” that would hit conservative media in the same way as the 1949 Fairness Doctrine.

His administration signalled early on that the net neutrality rules could face the chopping block. Last November, the President-elect declared that he wanted to put “a moratorium” on new federal agency policies. In May, the commission released WC docket 17-108, outlining Pai’s intent to reverse the Title II classification.

In the months since, there has been an outpouring of support for the original rules, with John Oliver dedicating an episode of Last Week Tonight to the cause, and Reddit hosting two major days of action. A series of Verizon protests across the United States, aimed at highlighting Pai’s background as a Verizon lawyer, have also drawn attention.

These protests have been huge. Reddit, which receives over a billion visits per month, saw around 70 percent of front page votes going to net neutrality content on the November 21 and December 1 days of action.

It’s unlikely Trump Jr. was serious about his bet that “most hadn’t heard of it before this week,” but he would probably do well to avoid taking that gamble.

More like this
Science
17 hours ago
This nuclear-powered X-ray “flashlight” may help scientists probe the Moon for water
By Andy Tomaswick and Universe Today
Science
16 hours ago
Clean energy farms may endanger birds and bats — but the remains can reveal a solution
By Emma Foehringer Merchant and Undark
Culture
16 hours ago
A 2011 Jake Gyllenhaal thriller reinvented the time travel movie
By Alex Welch
LEARN SOMETHING NEW EVERY DAY.
Share: