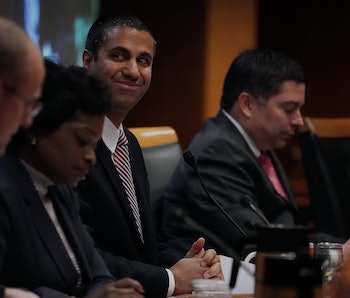 The Federal Communications Commission voted earlier Thursday to approve Chairman Ajit Pai’s plan to end net neutrality protections. As expected, the two Republican and two Democratic commissioners voted on party lines, meaning Pai held the deciding vote. It’s possible to pinpoint the exact moment the internet ended as we know it, even if the exact impact may take awhile to make itself felt.

For net neutrality supporters, Pai’s plan is potentially apocalyptic, as it removes protections intended to stop internet service providers like Verizon, AT&T, and Comcast from setting up a tiered internet, one where they can block, throttle, or otherwise control access for users or websites who don’t pay for preferential treatment. Pai and his fellow Republican commissioners presented Thursday’s vote as no big deal, a necessary corrective to Obama-era FCC overreach that won’t actually change anything for consumers.

That studious calmness is on display as Pai casts his vote and officially ends net neutrality. The official decision came after a short recess, as the room had to be evacuated in the middle of his statement at what Pai said was the advice of security.

“It is time once again for the internet to be driven by engineers and entrepreneurs and consumers, rather than lawyers and accountants and bureaucrats,” he said as he prepared to cast his vote. “It is time for us to act to bring better, faster, cheaper internet for all Americans.”

And here’s Commissioner Clyburn’s opening, in which she forcefully indicts the FCC’s dereliction of duty in its handling of this issue.

“Each of us raised our hands when we were sworn in as FCC commissioners,” she said. “We took an oath and promised to uphold our duties and responsibilities to — liberal quote here — ‘make available, so far as possible, to all the people of United States without discrimination a rapid, efficient, nationwide and worldwide wire and radio communication service with adequate facilities at reasonable charges.’ Today, the FCC majority is about to officially abandon that pledge, and millions are watching and taking note.”

More like this
Innovation
20 hours ago
Robots are ready to get touchy-feely
By Sarah Wells
Innovation
6.29.2022 6:00 PM
Can cars run on water? The science of a TikTok conspiracy theory, explained
By Andrew Moseman
Innovation
6.27.2022 8:00 PM
Artificial photosynthesis can grow plants without light — and may solve a planetary dilemma
By Steph Lee
Related Tags
Share: