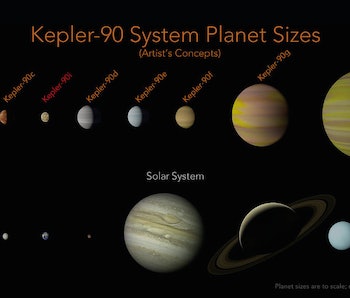 On Thursday, NASA and Google announced the discovery of an eighth planet in the Kepler-90 system, located 2,545 light-years from Earth. While we’re excited about another exoplanet — and the cutting edge machine learning technology that was used to find it — it’s not cool that this random world is trying to compete with our solar system.

You see, the discovery of Kepler-90i means that now, the Kepler-90 system is tied with ours for the highest number of planets around a single star. It was discovered using a neural network that analyzed data from NASA’s Kepler Space Telescope which is admittedly pretty exciting, but the description of this planet isn’t so neat — NASA describes it as a “sizzling hot, rocky planet that orbits its star once every 14.4 days.”

We’re already living in a metaphorical Hell on Earth — the universe doesn’t need a literal one!

“The Kepler-90 planets have a similar configuration to our solar system with small planets found orbiting close to their star, and the larger planets found farther away,” NASA wrote in a press release. “In our solar system, this pattern is often seen as evidence that the outer planets formed in a cooler part of the solar system, where water ice can stay solid and clump together to make bigger and bigger planets. The pattern we see around Kepler-90 could be evidence of that same process happening in this system.”

For those who are fiercely fans of our own solar system, the good news is that a ninth planet may be lurking around somewhere. The hunt for our mysterious “Planet 9” is still very much in motion, which, if found, would bring us back to #1 in the universe. Though astronomers have been searching for the hypothetical world since 2016, so far, they’ve had no luck finding it.

More information about Kepler-90i will no doubt emerge over the coming weeks, but one thing’s for sure: it’s messing with the wrong solar system. We’re unnecessarily competitive like that.