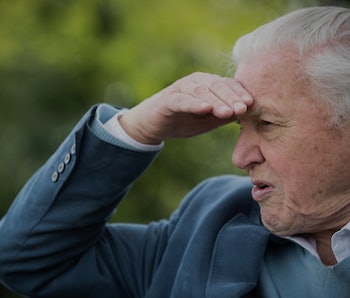 Fitting perfectly with the perpetual dumpster fire that has been 2017, certified nature daddy Sir David Attenborough says we are in the midst of a mass extinction. Attenborough, the man whose soothing voice narrates the Planet Earth series, a show that has helped inform many people’s understanding of nature and the interconnected web of life, said in an interview on Thursday that he thinks we’re right in the thick of the planet’s sixth mass extinction.

“The damage we are inflicting on species and ecosystems is so extensive and profound that scientists now believe we are witnessing Earth’s sixth mass extinction event – the last one marked the end of the dinosaurs,” Attenborough told City A.M..

Attenborough isn’t alone with this alarming conclusion. A small but growing consensus within the science community agrees we are currently in the middle of the Earth’s sixth mass extinction, made even worse by the accelerating rate of climate change.

As Inverse previously reported, each of the prior mass extinctions on Earth, the most recent of which was the Cretaceous-Tertiary extinction that killed most of the dinosaurs 65.5 million years ago, killed more than 75 percent of marine animal species on Earth.

Some argue that calling this time period and its loss of biodiversity an extinction fails to capture the true extent of the problems we’re facing.

His argument isn’t just about semantics. Ceballos’ study showed that a third of vertebrate animal species have seen their ranges shrunk and populations diminished over the last century. When his team took a detailed look at the 117 mammal species for which good data exists, every single one had lost at least 30 percent of its range since 1900. Forty percent had lost at least 80 percent of their range. Hence, his justification for using the term “annihilation.”

All is not lost, though. If humans can slow the acceleration of climate change, perhaps through innovations like clean energy technology, we could buy ourselves enough time to find some solutions. Whatever our fate, Attenborough is confident that, even though we can’t proceed without nature, nature will find a way to proceed — with or without us.

“Yet the history of our world shows even in the face of cataclysmic events, nature somehow finds a way,” he told City A.M. “Our planet can get along perfectly well without humans but we cannot survive at all without all the services that nature provides. So I suppose we have to ask: will self-interest kick in before it is too late for our species?”

More like this
Science
Jan. 29, 2023
Studying ancient human DNA has unlocked our origins — but the ethics are hazy
By Emiliano Rodríguez Mega and Knowable Magazine
Science
Jan. 25, 2023
Look: Primate relative shows how ancient animals adapted to global warming
By Jennifer Walter
Science
Jan. 23, 2023
Elephants could be key to saving the planet — here’s why
By Tara Yarlagadda
LEARN SOMETHING NEW EVERY DAY.
Related Tags
Share: