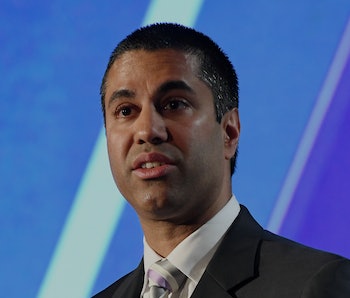 The Federal Communications Commission is about to vote on net neutrality. On Tuesday, 39 Democratic senators sent a letter to chairman Ajit Pai, urging him to reconsider the proposal to repeal the regulations that ensure equal access to internet content.

Since the vote was announced, internet communities have fought hard to make their voices heard through days of action and protests. Two organized days on Reddit, November 21 and December 1, saw a larger show of organic support than that surrounding the Super Bowl content earlier this year. On December 7, protesters stood outside Verizon stores to draw attention to Pai’s past as a lawyer for the company. Apple co-founder Steve Wozniak, World Wide Web inventor Tim Berners-Lee and several more key internet figures have urged the commission to reverse their stance.

Under the proposal, the commission would reverse its 2015 decision to regulate the internet as a utility under Title II, and the Federal Trade Commission would take over internet provider oversight. Opponents fear that the move will lead to a multi-tier internet where providers choose which content loads quicker depending on backroom business deals. The senators’ letter describes Pai’s plan as “reckless” and one that paves the way for “anti-consumer” action.

The vote, set to take place Thursday, is expected to fall on party lines, with the three Republican members outvoting the two Democratic members. However, a number of Republican figures like congressman Mike Coffman have come out in recent days questioning the plan.

Read the senators’ letter below:

We write to urge you to abandon your reckless plan to radically alter the free and open internet as we know it. Your proposed action will amount to the largest abdication of the Federal Communications Commission’s (FCC’s) statutory responsibilities in history.

At its inception, Congress delegated to the FCC the primary responsibility to protect consumers and the public interest with respect to the nation’s communications networks. With your current proposal, you have now decided to throw overboard those long-standing responsibilities — and consumers with them. In short, you are walking away from your statutory duties and effectively eliminating FCC oversight over high-speed internet access.

Your plan gives a broadband provider the ability to significantly alter their subscribers’ internet experience. Once adopted, this proposal will permit that provider to freely block, slow down or manipulate a consumer’s access to the internet as long as it discloses those practices — no matter how anti-consumer — somewhere within mounds of legalese in a new “net neutrality” policy.

Your proposal also makes sure that no other state or local government can fill this gaping consumer protection void by preempting them from adopting their own open internet consumer protections. It is not enough for the FCC to turn its back on consumers. You willfully plan to tie the states’ hands to prevent them from protecting their own residents. It is a stunning regulatory overreach.

Underlying your plan is the false notion that your action will return the internet to the supposed halcyon days of “light touch” regulation in the past. This notion — that the way the agency approached internet access in the 1990s and early 2000s is the perfect approach today — ignores the very different role that the internet plays in 2017. Over the past 20 years, intemet communications have become widely adopted and relied on by American homes and businesses. Yet, your plan ignores the central and critical role that access to a free and open internet plays in Americans’ lives and the role that the nation’s expert communications agency should play with respect to the networks underlying that access. Moreover, your assertion that your plan returns internet access to the way it was before is not correct. Even under the Bush-era FCC, the agency adopted open internet principles and held out the threat of regulatory action to combat harmful activity. Your plan eradicates even that backstop and leaves Americans without a regulatory safety net.

The future of the internet hangs in the balance. The FCC’s responsibilities over the nation’s communications networks remain, and are more crucial than ever, as the intemet has become fundamental to every aspect of our society. On behalf of our constituents — and future generations of Americans — we urge you to abandon this radical and reckless plan to turn the FCC’s back on consumers and the future of the free and open internet.