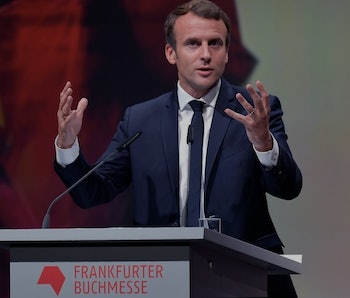 In June, French President Emmanuel Macron extended an invitation to international climate science researchers shortly after President Trump announced that the United States was going to pull out of the Paris climate accord. At the time, it was seen as a mild jab at President Donald Trump, but on Monday it blossomed into a reality that threatens the very real potential of a climate science brain drain.

In an official announcement, the French government reported that the invitation has yielded its first group of international scientists to France. Of the 18 scientists France has attracted, 13 will be moving from the U.S.

This move is a sign that the U.S. is increasingly becoming a country that climate scientists consider hostile to their work. It shouldn’t, however, really come as a surprise: We saw the first rumblings of this trend almost a year ago in the wake of President Trump’s Muslim travel ban, which destabilized the lives and careers of international researchers working in the U.S.

As Inverse reported in February, Iranian scientists have long sought education and work in the U.S. since their home country doesn’t nurture their work. France’s announcement this week — that it will poach some of the U.S.’s most cutting-edge researchers — suggests that the brain drain of other countries’ scholars into the U.S. could soon reverse.

The invitation that President Macron offered to American scientists in February, not long after the ban, was general and vague, promising a new homeland in France where scientists could pursue climate research free of “obscurantism.” This week, those words materialized into real actions.

Beginning in June 2017, after President Trump announced the U.S. would withdraw from the Paris Agreement on climate change, President Macron announced that he wanted to attract top climate scientists from around the world — and specifically the U.S. — with the not-so-subtly named “Make Our Planet Great Again” initiative. This program, which offers competitive 3- to 5-year grants worth up to €1.5 million each — roughly $1.7 million USD — attracted an initial 1,800 scientists, according to Science. After eligibility requirements and applications whittled down the number, the 18 scientists were chosen by an international panel of climate researchers.

History has shown that countries with policies that are unfriendly to science risk of losing their best minds, a phenomenon known as human capital flight — more commonly known as brain drain. It happened to western Europe in the years leading up to and following World War II; it happened to Iran after the revolution at the end of the 1970s; it happened to Turkey following the 1960 political coup; it’s happening to Ghana, whose healthcare professionals are seeking better-paying opportunities abroad; and it could now be happening to the U.S.

But for every country that experiences a brain drain, there’s always one that’s ready to accept their intellectuals. In the immediate aftermath of President Trump’s Muslim travel ban, European scientists opened up lab space to displaced researchers. They got organized, starting a web list of people willing to share space. President Macron has followed up on this energy, turning America’s hostility toward climate science into an opportunity to attract top researchers.

More like this
Science
Jan. 24, 2023
The Doomsday Clock is now at 90 seconds to midnight — here's what that means
By Kiona Smith
Science
Jan. 25, 2023
Look: Primate relative shows how ancient animals adapted to global warming
By Jennifer Walter
Science
Jan. 23, 2023
Elephants could be key to saving the planet — here’s why
By Tara Yarlagadda
LEARN SOMETHING NEW EVERY DAY.
Related Tags
Share: