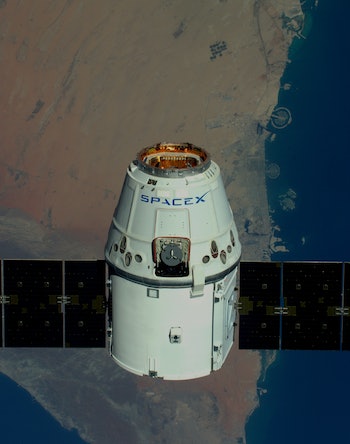 SpaceX is set to launch its 13th resupply mission to the International Space Station Wednesday. It’s a historic launch both for Elon Musk’s company and for NASA, as SpaceX will use its first fully recycled spacecraft to take 34 new experiments to the ISS on behalf of the space agency, with highlights including space debris, the first commercial good to be made in space, and a box of mice.

The commercial resupply mission, named CRS-13, is set to launch from Cape Canaveral in Florida. SpaceX plans to reuse a Dragon capsule and a Falcon 9 that have already been launched in previous resupply missions.

On Tuesday, SpaceX announced the launch had been delayed to Friday, and if the launch can’t take place then, it will happen in late December.

While previous SpaceX launches have reused a Falcon 9 booster, this is the first time both rocket and capsule are recycled from previous missions. The Falcon 9 was first used during the CRS-11 mission this past June and the Dragon capsule was first used during the CRS-6 mission in April 2015. While the Dragon capsule splashed into the Pacific Ocean, the Falcon 9 descended safely to a landing pad in Florida.

This reusability represents a savings of about $120 million over having to build new rockets and capsules; it’s a huge step to realizing SpaceX founder Elon Musk’s vision of fully reusable spacecraft.

This video shows the last time the Falcon 9 launching on Wednesday was in flight, as it returned to Earth in June.

Here’s a look at some of the fascinating experiments being sent into space:

The way plants grow, whether it be straight upwards or horizontally along the ground, is determined by each plant’s reaction to Earth’s constant gravity. Most plants detect gravity using these tiny, starch-filled packets — called statoliths. But plants without statoliths still show signs of being able to sense gravity.

Scientists will compare how seedlings with and without statoliths grow in various, low-gravity environments.

“It’ll be like asking each plant, ‘How does this level of gravity make you feel?’” Chris Wolverton, a professor of botany and microbiology at Ohio Wesleyan University, said in media briefing on Monday. “We’re planning on testing multiple increments of gravity to see what’s the least amount of gravity a plant can detect.”

This will allow scientists to see how they can manipulate plants’ gravity sensing abilities to help botanists and farmers on Earth develop more effective growing techniques.

High-performance optical fibers are in high demand now that we are in need for larger and larger amount of data to be transferred over long distances. Most fiber optic cables are created by using silica, which does the job but there is extensive researching indicating that ZBLAN — or heavy metal fluoride glass — can be used to make even better cables.

There’s one issue: Once ZBLAN solidifies under Earth’s gravity, it’s atomic structure formers into crystals which make it unusable for cables. Making ZBLAN cables in space stops it from crystallizing.

This could be the first commercially viable manufactured good made in space.

How many tiny particles of space debris batter the ISS on a daily basis? Joseph Hamilton, principal investigator for the Space Debris Sensor at NASA is going to try to find out.

Hamilton and his colleague are sending up a sensor that will be installed on the exterior of the space station to detect all the space junk that is constantly pelting the ISS. The sensor will be able to detect the density and velocity of each particle that comes into contact with it.

This study will help better understanding exactly what kind of debris humans have put into space (yes, we’re polluting out there, too) and what kind of damage they can cause to space crafts like the ISS.

Researchers at the Houston Methodist Research Institute are sending the crew aboard the ISS a box of mice. Each mouse will be implanted with a drug delivery system that could be used to eliminate daily injections some patients need.

The implants slowly release the a drug to treat muscle atrophy, which the mice will develop after being in space for some time. Once scientists are able to see how these mice react to the implant and if its effective this technology could be used to replace daily injections needed to treat many ailments and diseases.

This is the second experiment that will be installed on the outside of the ISS. Instead of tracking debris, this sensor will detect how much light energy from the sun is hitting the top of Earth’s atmosphere. This is a continuation of the NASA SORCE (Solar Radiation and Climate Experiment) mission launched in 2003.

“The total solar irradiance, or all of the light energy Earth receives from the Sun is larger than any other external source of energy by a large amount,” said Peter Pilewskie a professor of atmospheric and oceanic sciences at the University of Colorado Boulder in a NASA livestream. “This energy drives all process on earth.”

Understanding the type of light that blasts the Earth on a daily basis will give scientists insight on solar cycles and how this energy could affect things like climate change.