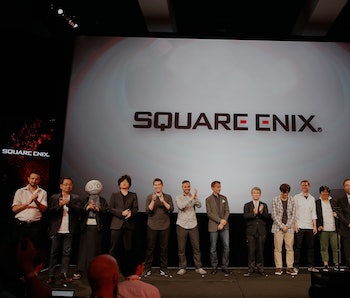 The first day of this year’s E3 conferences could very well have been the best, ever. Mass Effect, a remastered Gears of War, Gears 4, Star Wars: Battlefront, Sony granting every gamer’s wishes with The Last Guardian, Final Fantasy VII, and Shenmue 3, it was just so much to take in.

Maybe it was that peak adrenalin that started and ended the third day with Nintendo and Square Enix on a lethargic note. But whether any of these has you excited or not, this is what’s happening for these two gaming giants from Japan in the coming year.

Nintendo’s “E3 Direct” is an online-only stream. No live demos or speakers to introduce the games, this “conference” allows them to show off exactly what they want to show. There’s no pressure of a live audience, but perhaps that kills the energy before it even starts. There’s no reason to “wow.”

And for some reason, they began with puppets.

A multiplayer Metroid Prime shooter for the 3DS coming in 2016. Shortly after its announcement, angry fans have petitioned for its cancellation. It might have something to do with the fact that die-hard Metroid fans want a new game featuring their heroine Samus Aran — Federation Force does not — but still. What?

A 3DS port of last year’s Hyrule Warriors on the Wii U. Set for release early next year.

Already out in Japan since late April, Xenoblade Chronicles X is coming December 4 to North America. A spiritual successor to 2010’s Xenoblade Chronicles, it’s an adventure RPG where players explore continents with vast landscapes, rescue innocents left behind in shelters, and pilot giant mechs called Skells. Looked the most graphically powerful out of all of Nintendo’s line-up, but still not quite to the level of its competitors.

Coming to the Wii U, Animal Crossing: Amiibo Festival is a Mario Party-style virtual board game, but with the cute little animals that inexplicably spawned a multi-game franchise. Four new Animal Crossing Amiibos will also be released: Isabelle, Tom Nook, KK Slider, and Mabel.

The next Mario RPG crosses over with the Paper Mario series in Mario & Luigi: Paper Jam. It will combine elements of both the Mario RPG gameplay and form with the unique Paper Mario mechanics. Coming to the 3DS, it will be developed by Intelligent Systems and will be released in 2016.

Coming to Wii U this holiday, it’s the next in the Mario Tennis line. The gameplay trailer featured power-ups that turned Peach and Mario into giants, because that’s exactly what you would expect in a tennis video game.

Another Fire Emblem game at this year’s E3, and it’s coming to the 3DS in 2016. It’s a tactical RPG and sure to please whoever is already into that sort of thing.

Featuring a gorgeous 8-bit Mario Amiibo, Mario Maker allows players to fully customize their own levels to play and share online. This is probably the most exciting game Nintendo has this E3. The creativity this game can unlock is boundless, so expect kooky YouTube videos when this game finally lands in Wii U consoles.

Amiibo functionality is within the game, allowing you to play 8-bit versions of your Amiibo figures right there in the custom levels some nerd in Boston or Canada or wherever has uploaded.

After the blockbuster announcements of a Final Fantasy VII remake, a new Hitman, and rumors of Kingdom Hearts III, how will the major Japanese publisher fare?

It’s worth noting that Square Enix postponed their live presentation by an hour, perhaps not to compete with Nintendo. Not that they had anything to worry about anyway, but hindsight is 20/20.

Out of the gate, Square Enix announces Just Cause 3, the third in the series of open-world destruction games. Coming to the PS4, Xbox One, and PC this December 1st.

The Go mobile games of Square properties has had success with last year’s Hitman Go. They’ve decided to continue Go with the Tomb Raider herself, Lara Croft in Lara Croft Go. The game is a stylized, cel-shaded take on the adventurer and will feature turn-based gameplay, something very unlike previous Tomb Raider titles.

The new Kingdom Hearts mobile game coming to Android and iOS has been officially announced for North America (it was previously unclear if it would be coming to western shores at all). There is no release date, but a gameplay trailer was shown featuring Disney heroes like Mickey Mouse, Goofy, and Donald Duck alongside Final Fantasy characters. As expected. The game’s story is tied with Kingdom Hearts III.

Already shown off during Sony’s presentation, Hitman will be released digitally for Xbox One, PS4, and PC on December 8th.

But Square Enix revealed more details that lets Hitman stand apart from its predecessors: the game “evolves.” Missions and objectives have “permanent outcomes.” Some targets are only available to kill for a limited time. Players can orchestrate elegant assassinations or use brute force, but targets will change over ti and globe-trotting was hinted at.

Described as a “good old-school Japanese RPG” by its producer, the game will be the fifth in the Star Ocean series. It will be exclusive to the PlayStation 4 and PlayStation 3 in winter of 2016.

Square Enix has invested into creating a brand-new studio, Tokyo RPG Factory, for the creation of a new RPG, titled Project Setsuna. Square Enix is hoping to deliver “rich stories” and “memorable characters” with this entirely new IP. Not much was shown or discussed, but Square is banking on it quite a lot.

Coming “early 2016,” a new Deux Ex game was shown via an extensive gameplay trailer. It will be released for the PS4, PC, and Xbox One.

They saved the best for last.

Perhaps Square let Sony announce Final Fantasy VII so they’d have enough oxygen for Kingdom Hearts III. The third entry in the massive Kingdom Hearts franchise will be released for the PS4 and Xbox One. “When” is another matter entirely; the gameplay trailer only said “Now in Development.” So, keep waiting.

More like this
Gaming
5.11.2022 4:00 PM
Skywalker Saga made one of Star Wars' worst characters even more awful
By B.C. Wallin
Gaming
5.6.2022 7:00 PM
Esports’ most notorious CEO is finally facing an overdue reckoning
By Steven Asarch
Gaming
5.7.2022 5:30 PM
Square Enix Embracer deal explained: Who gets what?
By Hayes Madsen
Share: