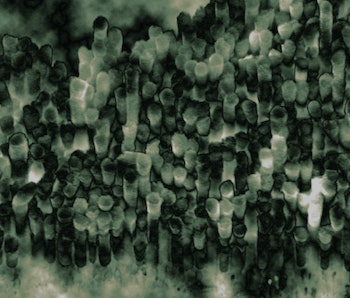 In 2004, a pair of researchers at the University of Manchester in the UK were wiling away a Friday night by doing a slightly more high-tech version of using Scotch tape to peel the top layers off of a flake of graphite. What would be a particularly silly waste of time for anyone else ultimately won them the Nobel Prize in Physics, as they peeled away so many layers they were left with a material that was only a few atoms thick. This was graphene, the world’s first two-dimensional material.

In the 13 years since, researchers have tried to figure out just how to harness this and other 2D materials for the next generation of electronics, effectively eliminating the issue of how to save space in everything from phones to solar panels. The problem is that it’s not enough just to make something 2D; it has to be possible to put together multiple such materials in the same atoms-thick plane, creating what’s known as a nanowire.

In a paper published Monday in Nature Materials, an international team of researchers detail the big step forward they have taken toward creating the smallest wire known to humanity. It’s a development that opens the door to embedding ultra-thin solar panels or LED screens onto surfaces like clothing or glass.

The researchers from King Abdullah University in Saudi Arabia, Cornell University, the Massachusetts Institute of Technology, and Academia Sinica explain how they were able to run a wire, made of molybdenum disulfide, that is only a few atoms in diameter, through tungsten diselenide, a material used for flexible solar cells.

Working with stuff that is only a few atoms in diameter is hard enough, but learning how to essentially mix these materials together and maintain their properties is a process that has bedeviled scientists. The authors of this paper detail how they were able to create nanowires from a material mostly used as an industrial lubricant in hopes of encouraging the assembly of atom-scale electronic components.

“The manufacturing of new 2D materials still remains a challenge,” Markus Buehler, an engineering professor at MIT, said in a statement. “The discovery of mechanisms by which certain desired material structures can be created is key to moving these materials toward applications. In this process, the joint work of simulation and experiment is critical to make progress, especially using molecular-level models of materials that enable new design directions.”

Graphene’s size and versatility has earned its reputation as the building block of the future, and this research is the most progress yet toward solving the problem of how to put multiple nanomaterials together in the same plane.

The advantage of such 2D nanotech is that it’s incredibly strong and acts as an invisible web that electrical currents can pass through. Almost any surface can be coated with the material, allowing it to make electronics even more ubiquitous than they already are.

Being able to mass produce 2D materials would usher in a new era of lightweight screens and solar cells that could be implanted pretty much anywhere — making the idea of a screen on your coat sleeve more of a reality than a sci-fi pipe dream.

If you liked this article, check out this video about 3D graphene.

More like this
Science
Sep. 16, 2022
The science behind The Rings of Power's mesmerizing title credits
By Tara Yarlagadda
Science
Sep. 14, 2022
Space satellite proves a crucial test of Einstein's theories
By Sarah Wells
Innovation
Sep. 21, 2022
Look: Drones could be the future of 3D-printed architecture
By Jennifer Walter
Related Tags
Share: