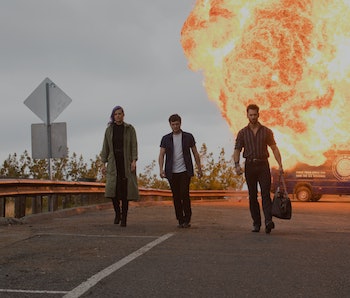 In time travel stories, characters usually have the ultimate get-out-of-jail-free card. Even if they mess something up in the past, they can always go back and fix whatever they screwed up. Marty and Doc did it in Back to the Future, Harry Mudd just did it on Star Trek: Discovery, and the titular Time Lord of Doctor Who does it all the time. But what if the consequences of time travel were even greater? Well, the stakes of time travel in Hulu’s Future Man are nigh apocalyptic.

Even though it’s mostly a comedy, Future Man takes its sci-fi seriously by creating unprecedented stakes that shake up the loosey-goosey tropes of your typical time travel stories. When the characters of Future Man move through time, forwards or backward, the reality they leave behind disappears from them forever. And the more they try to change it, the more the timelines tend to get totally messed up.

Future Man focuses on Josh Futturman, a young gamer in a dead-end job who is totally frustrated with his life — until he beats an unbeatable apocalyptic video game and is thrust into a time-traveling adventure. After beating Biotic Wars, characters from the game appear in his bedroom, hailing from the future. His journey then becomes a veritable clustercuss while trying to prevent the apocalypse.

Dr. Kronish is a scientist Josh works for in the present day, who in 1969 contracted herpes. His research seeking a cure for the STD one day purifies mankind into Biotic superhumans, eventually giving rise to a totalitarian regime. Wolf and Tiger, the aforementioned warriors from the future, recruit Josh into this mission. But how do they prevent the literal Biotic Wars?

Should they kill Kronish as a baby? Prevent him from getting herpes? Encourage his younger self to lead a more fulfilling life? The team attempts each option throughout the course of the show, gradually realizing that trying to fix the timeline is harder than it might seem. As Josh struggles to make moral choices while time-traveling, he realizes that doing literal “good” usually just makes things worse for everybody.

The biggest obstacle in Josh & co.’s path is the “butterfly effect.” Ashton Kutcher’s mediocre sci-fi film of the same name effectively dramatizes how the principle works, but it describes how small causes can have huge effects in the future. Popularized by Ray Bradbury’s short story “A Sound of Thunder,” the butterfly effect explains how even a butterfly flapping its wings could cause a tornado on the other side of the world. Events in time function in much the same way.

Because the show is so ridiculous, it allows the plot to go in totally bizarre, fun directions that contrasts with the seriousness of its sci-fi. Yet, the future is always impacted by actions in the past, so the time-traveler becomes unmoored from any timeline or location. When Josh travels to the past and then back, his actions often accidentally affect the world in subtle ways. The parents he returns home to, for instance, get increasingly more strange to him as the season progresses.

In these ways, time travel feels serious like in Terminator, even when the comedy steers more towards Hot Tub Time Machine.

On the polar opposite end of the spectrum is a time-travel show like Doctor Who, which, for all its fun-loving brilliance, plays it fast and loose with “time travel rules.” Doctor Who touts terms like “fixed point in time” without ever fully explaining their significance in a coherent way.

Oftentimes, the Doctor might take his companion into the distant past and then return them to the present. The world is the same, as if nothing had ever happened, because the world of Doctor Who is governed more by the predestination paradox than it is the butterfly effect.

Sometimes called a causal loop, the idea basically posits that everything that must happen has happened and nothing will change it. Even if the threat of danger looms in many of the Doctor’s adventures, things usually work out — even when he learns that some kind of fire alien caused the volcano to erupt at Pompeii rather than, you know, seismic activity.

Future Man calls bullshit on this kind of idea. Time travel means something so much more, and things can get pretty fucked up pretty quickly. Every time Josh and his friends go back in time, individual characters in the present become entirely different people with different jobs or roles. Josh’s own father goes from jolly liberal to gun-toting racist after Josh, Tiger, and Wolf accidentally wind up fighting Josh’s grandparents and uncle in 1969.

But perhaps the most egregious way Josh messes things up happens in the ‘80s.

Remember in Back to the Future when Marty McFly goes back in time and meets his own parents when they’re around his age? Josh does the same thing. Because the time travel device (TTD) in Future Man locks to geographic locations, transporting the user through time, we see Josh’s family home during several different decades. In one particular adventure, it’s at the house party whe his parents first met.

What ensues is truly insane in ways I won’t spoil here, but after Josh somewhat stupidly says his name is “Joosh” — because he’s afraid to use his real name — his parents wind up naming their son Joosh instead. So when “Josh” returns to the present day, everyone calls him Joosh. Come to find out:

There’s a Josh doppelganger in that timeline that locked his parents away in a home and pimped out the family house with all sorts of high-tech gadgets after he became a wildly successful pro gamer. Up to this point, most changes to the timeline were subtle and insignificant — a boss gets a personality shift and demotion in the present — but this? Josh’s whole existence is erased.

In the back-half of Future Man’s first season, the severity of time travel is really called into question.

Often, Tiger and Wolf’s hyper-violent temperaments are played for laughs, but as they evolve as characters over the course of the season, their sense of duty, honor, and integrity emerge as central facets of their character. At a critical point in the journey, Wolf wants to give it all up and live out his life in the ‘80s, while Tiger tries to sway him to recommit to a dangerous mission. We come to realize that they’re so much more than reckless, badass warriors — because they knew exactly what they were sacrificing when they traveled through time:

Wolf: “Throwing our lives away is not going to bring our team back.”

Tiger: “Uhh, yeah, it is. If we succeed, we go back to the future, the Biotics don’t exist, and our team is still alive.”

Wolf: “Maybe. As different people who don’t know us or what we did, don’t know the hell they could have lived in. We’d be strangers in a world we don’t know or understand.”

Tiger: “That’s the sacrifice we signed up for. And, yeah, maybe no one would know. But I’ll know, and you’ll know, and we’ll have each other. That’s enough for me.”

They didn’t commit to their mission for the glory or reputation. They did it because they had to, and that knowledge is enough for them. It’s also enough for Josh at the end of the season, even if he does wind up trapped in a timeline he might never understand.

More like this
Entertainment
16 hours ago
What the emotional ending of Vesper actually means
By Eric Francisco
Culture
Sep. 18, 2022
You need to watch the sexiest sci-fi thriller of all time on Amazon Prime ASAP
By Andy Crump
Entertainment
18 hours ago
Who is Adar? Rings of Power Episode 6 solves the show’s biggest mystery
By Alex Welch
Share: