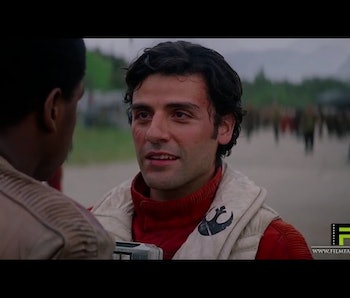 In a perfect world, Poe Dameron and Finn would be the next Han Solo and Leia Organa. Finn and Poe’s immediate connection in Star Wars: The Force Awakens is the perfect foil to Han and Leia’s fantastically biting back-and-forth from the original Star Wars trilogy.

As the second film in a Star Wars trilogy is, traditionally, the most romance-heavy of the three — Star Wars: The Empire Strikes Back and Star Wars: Attack of the Clones saw the introduction of the two most iconic couples in Star Wars history — Star Wars: The Last Jedi provides the perfect opportunity for a blossoming relationship. And as The Last Jedi is slated to be unlike any Star Wars movie we’ve seen before, what better way to set it apart than by introducing a romantic (or, even, an unromantic but still tender and loving) relationship between two male leads. Those male leads could be Finn and Poe. Those male leads could be Finn and Poe.

And seeing as the Irish Film Classification Office rated The Last Jedi as “12A” for “mild sex and nudity” (whatever that alludes to), maybe, just maybe, that means there’s a kiss hidden somewhere in the film.

Inverse’s Last Jedi Wishlist is a 15-part countdown to the next film in the Star Wars franchise. Ranging from the plausible to the “this is mostly a joke but that doesn’t mean it wouldn’t be great,” this wishlist is a collection of the Inverse entertainment team’s favorite theories and rumors about what to expect from The Last Jedi.

Next up: a kiss of some sort between Finn and Poe.

The following speculates on what could happen in Star Wars: The Last Jedi, meaning, if any of the following comes to pass, everything below of this could be considered a very intuitive spoiler.

Star Wars is a story about love and friendship — and, y’know, intergalactic war and fascism and other stuff, too, but that’s beside the point. Darth Vader wasn’t ever a fantastic, loving father, but themes of love, acceptance, and family have run throughout the entire Star Wars franchise.

There’s also a surprising amount of kissing going on, if you think about it.

Shmi Skywalker hugged and kissed her young son, Anakin, goodbye in Star Wars: The Phantom Menace, and then Anakin and Padme Amidala fell in love and tried to carve a life out for themselves in Attack of the Clones and Star Wars: Revenge of the Sith. Leia kisses Luke on the cheek in Star Wars: A New Hope; then she falls in love with Han Solo and they subsequently kiss throughout The Empire Strikes Back and Star Wars: Return of the Jedi. Rey smooches the top of Finn’s head while he’s injured at the end of The Force Awakens. The only Star Wars film to not include a kiss is, supposedly, Rogue One: A Star Wars Story, though many fans presumed Jyn Erso and Cassian Andor kissed in the elevator at the end of the movie as they swayed back in forth, in pain and knowing their death was imminent.

The best thing about kisses in Star Wars is that they’re not an inherently romantic thing. Just like in real life, people in Star Wars kiss their family and friends, a brief brush of lips on a cheek or over someone’s hair to show affection and support. A friendly kiss between Poe and Finn would also be wholly acceptable. It wouldn’t be as revolutionary or groundbreaking as a romantic kiss between two men in a blockbuster science fiction series that spans generations and has inspired millions, but friendly kisses are also nice.

Poe and Finn’s casual but sincere interactions in The Force Awakens ignited a firestorm online, with Star Wars fans new and old jumping onto the “Stormpilot” (Finn and Poe’s couple name) bandwagon. So, not only would a kiss break down barriers, it would also just be really exciting for a lot of people who see romantic potential between the two. And even if the aspired kiss is just friendly, think of the impact. If The Last Jedi can throw away the chains of traditional masculinity and show that it’s okay for men to kiss in a friendly manner, then Lucasfilm would be breaking down barriers like never before.

Why Leia Could Bust Out a Lightsaber in Last Jedi.

Anakin Skywalker’s Ghost Could Still Appear in The Last Jedi.

More like this
Entertainment
Jan. 24, 2023
The Last Jedi's greatest innovation was actually JJ Abrams' idea
By Dais Johnston
Culture
Feb. 1, 2023
If The Last of Us Made You Bawl Your Eyes Out, You Need to Revisit This Zombie Rom-Com
By Mónica Marie Zorrilla
Culture
Jan. 26, 2023
Michael J. Fox’s strangest movie remains a stupid, ridiculous joy
By Mónica Marie Zorrilla
LEARN SOMETHING NEW EVERY DAY.
Share: