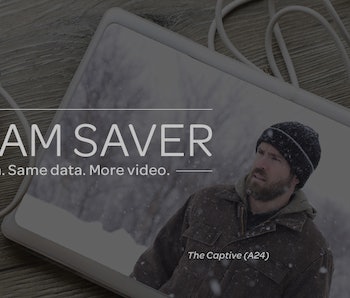 With the Federal Communications Commission likely set to abolish net neutrality at its next meeting on December 14, a big, obvious question is just what the internet will look like after the change.

A feature AT&T rolled out late last year to reduce users’ bandwidth when streaming videos to their phone may provide a suitably grim preview of an internet without net neutrality — the principle that internet service providers can’t play favorites with content or charge users for faster speeds.

The Stream Saver feature doesn’t necessarily sound like such a bad idea at first glance. In order to conserve users’ data, it automatically reduces the quality of streaming video to 480p. That’s not exactly high definition, but also decent enough when watching a show on your smartphone screen.

If one were feeling generous toward AT&T — and no, we’re not sure why someone would, but let’s roll with this — one could say it’s a helpful way to keep people from going over their data limits. Which, yes, are set more or less arbitrarily by AT&T in the first place. But again, we’re being generous.

As a highly upvoted comment thread on r/technology pointed out Wednesday, the problems are all in the details. Stream Saver is an opt-out, not opt-in feature. Users have reported since its inception in late 2016 of not being informed as to why their streaming video was suddenly lower quality, meaning they have to go hunting for a way to switch it off.

That’s a little sneaky, but it doesn’t totally destroy the whole rationale behind the feature or anything. But then there’s the fact even people with unlimited data plans have had Stream Saver automatically activated, despite the fact there’s literally no reason on the user’s end to have a data-limiting feature. The only side that benefits from decreasing the data usage of someone with an unlimited plan is AT&T, which saves a bit of money on bandwidth.

It doesn’t take much extrapolation to see how a feature like this could crop up in a world without net neutrality, except with a couple additional spikes. In the current incarnation of Stream Saver, AT&T merely makes the opt-out feature a little difficult — or very difficult, depending on which user you ask — to find. A post-net neutrality version of this might still offer an opt-out, but only for a fee.

This is a potential blueprint for how tiered service could creep in, especially if the anti-net neutrality FCC isn’t totally wrong when it argues the free market will punish ISPs that roll out unabashed tiered internet plans straight away. The tiering may instead come with these little-publicized, frequently confusing features, in which people only learn there’s a price to pay when they realize they are no longer getting the service they originally stood up for.

Stream Saver foreshadows a death of net neutrality by a thousand business-minded cuts, rather than the one killing blow of the FCC’s vote. It may not be the perfect analogy for what awaits the internet on the other side of the December 14 vote — we still can only guess what the ISPs will do once they get the green light to roll back net neutrality protections — but this is AT&T’s past track record, and it’s not exactly encouraging.

More like this
Science
Sep. 24, 2022
Is a fact always true? A philosopher explains how to spot the difference
By Peter Vickers and The Conversation
Innovation
Sep. 21, 2022
Look: Drones could be the future of 3D-printed architecture
By Jennifer Walter
Innovation
12 hours ago
ePlane? Electric planes may come sooner than you think
By Gökçin Çınar and The Conversation
Related Tags
Share: