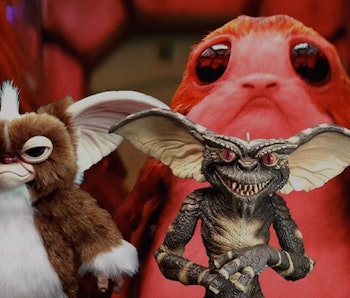 Porgs are the latest cute and cuddly addition to the Star Wars universe — or maybe they’re terrifying nightmare creatures. What if Lucasfilm has been lying to us? What if porgs are actually the gremlins of Star Wars?

On Wednesday, Entertainment Weekly published an “investigation” into whether or not porgs, the tiny puffin-like creatures that inhabit Ahch-To in Star Wars: The Last Jedi, are scary. Apparently, Finn actor John Boyega has what he describes as a love-hate relationship with these screechy winged hamsters.

“I just remember doing some stuff and seeing a lot of porgs around,” Boyega said. “And they are interesting, but for me, I had a love/hate relationship with them. They’re very, very cute, but when you put them in a bunch, in holes, on the Millennium Falcon, that’s when they start to become really, really freaky… “They’ve got real big eyes, all bunched together. There were, like, little tiny ones and little big ones that would just…yeah, it looks like a rash.”

The EW article went on to reveal that porgs have mouths “full of sharp teeth,” which is an interesting but not wholly unexpected development. Porgs are based on puffins and puffins are technically carnivorous, as their diet consists of fish. Meanwhile, porgs’ weird little mouths are rather rodent-like, and most rodents are omnivores, meaning they eat both meat and veggies.

One of The Last Jedi’s latest trailers gave Star Wars fans an intimate look inside a porg’s mouth as Chewbacca’s co-pilot porg screamed out a haunting (and hilarious) sound. Not only do these little guys have rows of sharp teeth, but it also looks like they have canines. Canines — the longer, sharper teeth toward the front of the mouth — are used to hold in place and render flesh and other hard-to-tear foods. Humans have them, dogs have them, and, apparently, so do porgs.

You know what other movie creatures were seemingly cute at first and turned out to have rows of sharp teeth and an insane lust for trouble?

If porgs invade the Millennium Falcon, tear at the wiring, and generally cause mayhem for Rey and the rest of the gang on Ahch-To, then just think about how much destruction they could cause at a Resistance base or in a city? We know the caretakers of Ahch-To eat porgs, but what if that’s just because the porgs will eat the caretakers if they aren’t careful?

Rey better watch her back. She might just find herself held down by a mountain of porgs looking for an afternoon snack. Star Wars has gone horror, y’all.