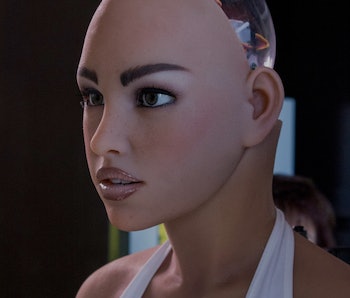 Sex robots could lead to a revolution in marriage, as people start choosing to settle down with others for non-sexual reasons, a the author of a new book claims.

Similar to how the development of contraceptives changed social attitudes toward female sexuality, the creation of machines that simulate sexual relationships may lead to a widespread reconsideration of the role sex plays in marriage.

“We know that technology has impacted on human relationships in the past so there is every reason to think that sexbots will do so too,” John Danaher, a lecturer in law at the National University of Ireland, Galway, tells Inverse.

Danaher co-authored Robot Sex: Social and Ethical Implications with Neil McArthur, associate professor of philosophy at the University of Manitoba. The book, released in October, features contributions from a number of experts around how sex robots will change many aspects of everyday life.

The book claims that sex robots could lead to people entering into marriages with less concern for sex. As an example, two heterosexual men could choose to enter into a marriage and raise children in the knowledge that their sexual desires would be fulfilled by robots. This change could then lead to a further widespread acceptance of non-monogamous marriages, as the uncoupling of sex and marriage becomes more commonplace.

“[Adshade] suspects, and I agree, that sexbots will further reduce the link between sex and marriage, encouraging us to focus on companionship, co-parenting and other reasons for intimacy when seeking out a marital partner,” Danaher says.

Current machines are a long way off the potential future offering, though. While machines like Samantha are hitting the shelves, offering a doll that responds to voice commands through an A.I.-powered head at a price of $5,000, these pale in comparison to the future potential.

“Sexbots like Samantha and Harmony are a long way from offering this, but they are steps in this direction,” Danaher says. “Other developments in social robotics — i.e. increased AI, dexterity and subtlety of movement, ability to replicate human emotions — are proceeding apace and they will eventually find their way into sex robot development (though note, as an aside: I doubt the future lies in single-function sexbots; I think it is more likely that we will have multi-purpose robots that include sexual intimacy among their functions).”

Sergi Santos, the creator of Samantha, has shared similar sentiments before. In a previous interview with Inverse, Santos said that he saw Samantha as a stepping stone to a “guardian angel”-like all-encompassing machine.

“Now you don’t have to work, don’t have to care about doctors because this cyborg will know everything about you and be able to heal you, this guy will be your angel, your protector,” Santos said. “Imagine if we could have something that takes care of human beings at all levels.”

When and how do most Americans lost their virginity?