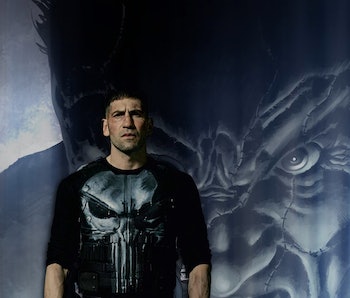 That’s gonna leave a mark. In the epic finale to Season 1 of Marvel’s The Punisher on Netflix, Frank Castle (Jon Bernthal) has an epic showdown with someone who will become his greatest nemesis from the comics next season.

Spoilers for The Punisher ahead.

In the final episode of The Punisher, Frank’s former best friend Billy Russo (Ben Barnes, Sons of Liberty) psychologically messes with Frank by bringing him back to the carousel where his family was murdered. During their brutal bout, Frank gets the upper hand and wins when he smashes Billy’s handsome face into a glass mirror. The glass mirror shatters, leaving Billy’s face horribly bloody and scarred. A shard of glass is sticking right out of Billy’s left cheek.

It is really nasty, and no doubt, it will leave a hell of a mark. It also culminates Billy Russo’s sub-arc, which mostly consists of everyone around him noticing just how disturbingly handsome he is. But if you know the comics, you know that Billy Russo is meant to become the hideous Jigsaw, a serial killing supervillain who prowls the New York underworld as a hitman.

Originally making his debut in The Amazing Spider-Man, Jigsaw became a Punisher mainstay, appearing in the very first issue of the Punisher’s solo series Punisher and various subsequent issues. Previously, Dominic West (The Wire) played a more gruesome version of the character in the 2008 movie Punisher: War Zone.

Unlike the TV show in which Billy Russo is a soldier turned head of the private military group Anvil, in the comics, Billy was the son of an abusive father who became a notorious hitman in the New York crime world. His good looks gave him the nickname “the Beaut,” but crossing with the Punisher — in which Frank threw him through a glass pane — scarred Billy’s pretty face. Horrified, Billy adopts the name “jigsaw” due to the puzzle-like scars his mug had become.

Although Season 2 of The Punisher hasn’t been officially announced, Billy’s becoming into Jigsaw will likely be a big deal should Netflix renew the series.

Marvel’s The Punisher is streaming now on Netflix.