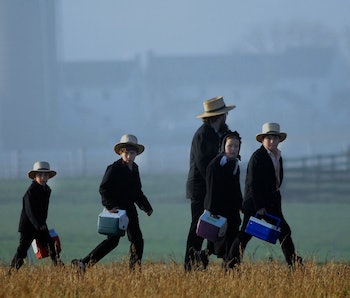 Scientists announced on Wednesday that they discovered a rare genetic mutation in an Amish community in Berne, Indiana that could explain why some members of the group live longer than others. Amish people in the United States have lived in relative isolation since they immigrated from Europe in the 18th and 19th centuries, which has lent them significant autonomy but also some unique genetic consequences. Centuries of genetic drift and inbreeding have left these isolated religious communities with a particular gene mutation that can either cause a bleeding disorder or confer longer life.

In a paper published Wednesday in the journal Science Advances, an international team of researchers identified a mutation in the gene called SERPINE1 that’s common among the Berne Amish. They studied 177 members of the community, 43 of whom carried the gene mutation. Some of the carriers had some unique shared traits.

What they discovered was that, when a person carries only one copy of the mutated SERPINE1 gene, they exhibit some remarkable characteristics associated with longer lifespans as well as longer periods of healthy life, which the researchers refer to as “healthspan.” These people are said to be heterozygous; people who carry identical copies of the same gene, one from each parent, are called homozygous for that gene.

“The findings astonished us because of the consistency of the anti-aging benefits across multiple body systems,” Douglas Vaughan, the lead author of the paper, said in a statement.

“That played out in them having a longer lifespan. Not only do they live longer, they live healthier. It’s a desirable form of longevity.”

“Heterozygosity was associated with significantly longer leukocyte telomere length, lower fasting insulin levels, and lower prevalence of diabetes mellitus,” write the study’s authors. These factors are all associated with better health. Longer telomeres on leukocytes — white blood cells — in particular, are markers of cell health since telomeres gradually shorten as cells divide, and when they get too short, the cells die. So, longer leukocyte telomeres are associated with lower levels of cell aging and death. Longer-lived white blood cells, in turn, translate to better immune health.

“In the extended Amish kindred, carriers of the null SERPINE1 allele had a longer life span,” the authors continue. The difference they observed was pretty big: The researchers found an average of seven additional years of life among the SERPINE1 carriers when compared to the other members of the community.

But carrying the mutation is not all good news. The homozygous individuals — those that carried two copies of the mutated allele — also had a bleeding disorder called hemophilia. This issue was what actually led the researchers to study this particular population in the first place.

For the moment, this genetic mutation is most prevalent within the genetically isolated Amish community, but it could eventually find its way into drug stores. Vaughan and his colleagues have been working on a drug that induces the mutation in lab animals, which resulted in significantly longer lifespans. They hope to adapt these findings to an FDA-approved drug for diabetes and obesity. It’s not a “longevity drug” yet, but it does offer an avenue into hacking the biology of aging and long life.

More like this
Science
Jan. 22, 2023
Infection expert answers 7 top questions about Covid-19’s “Kraken” subvariant
By The Conversation and Sameer Elsayed
Science
10 hours ago
Studying ancient human DNA has unlocked our origins — but the ethics are hazy
By Emiliano Rodríguez Mega and Knowable Magazine
Science
Jan. 22, 2023
New mRNA cancer vaccine has a key difference from most jabs
By Mark R. O'Brian and The Conversation
LEARN SOMETHING NEW EVERY DAY.
Related Tags
Share: