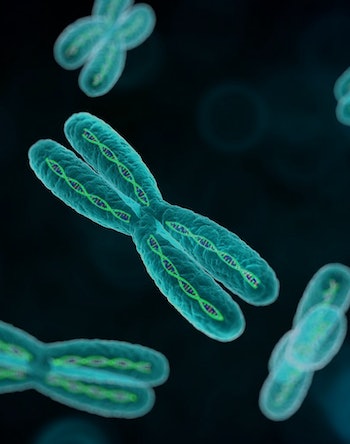 Elizabeth Parrish, Chief Executive Officer and guinea pig for Bioviva, announced today that she has become the first human “successfully rejuvenated by gene therapy.” Using two proprietary processes, Parrish claims to have reversed two decades worth of telomere shortening, the process that leads to the breakdown of cell replications in the vast majority of living things. Telomere scores — measured using white blood cells — indicate that Parrish, who was 44 years old in September, has slowed a cellular process many scientists believe to be one of the root causes of aging.

That makes today a big day for Elizabeth Parrish. She’s publicly announcing a potential cure to the disease she feared would kill her: Time.

Parrish has become one of the leading lights of the biohacking movement by refusing to see aging as a fundamental fact of life. She described her highly experimental gene and cellular therapies as treatment targeted against an epidemic sometimes called the “silver tsunami.” She has made it very clear that, to her, “old” is a diagnosis. What she hasn’t always made clear — and seems to actively avoid addressing — are the moral, societal, and even medical ramifications of her work. Also the science.

Earlier this week, she spoke to Inverse about becoming her own patient zero, how human cells are like computers, and why she’s justified in evading the FDA.

What made you realize that aging was a disease and not a normal process?

I had actually gotten involved to cure childhood disease, so I wasn’t exactly entirely prepared to find out that biological aging was in fact a disease. I went to a very crucial conference that changed my mind: I ended up at the SENS (Strategies for Engineered Negligible Senescence) conference in Cambridge, U.K., and I became very interested in this idea that perhaps biological aging itself was a disease. I took the time to speak with many researchers after that and found out that some of the drivers of childhood disease were in fact accelerated aging.

That’s certainly a shift in the way we think about aging.

I basically had to change my thinking to realize that the body’s cells are very much like a computer, and the things that they’re programmed to do eventually land up with a lot of damage over time. Some people get that damage at a youthful age; that is, some people have programming issues — genetic problems — early on. Some people are born with them. But all of us are accumulating this damage that will eventually lead to the symptoms of the aging disease and kill us.

Framed that way, it seems like a much more daunting problem than dealing with the diseases we already know about.

How do you plan to study the disease of aging?

I thought that one of the most important things that we needed to do was to start collecting human data. It seemed to be what we were lacking; we were sitting on all sorts of mouse data for a slew of diseases that actually looked really good. I think we’ve cured cancer a hundred times in mice. We’ve reversed atherosclerotic plaques. We’ve reversed biological aging with telomerase inducers. We just weren’t using it in humans. So in order to get the safety data, I decided I would get behind them. I would prove that they were safe by taking them.

I am patient zero.

Last year, you went to Colombia to undergo the first round of your BioViva gene therapy treatment. That was a huge risk.

But living is very risky, and you’re guaranteed to die of these diseases. If we can start using these methods in end-stage patients — patients for compassionate care scenarios — and start getting good results, we can move them back into patients who are not in such critical shape, then we can move them back to preventative medicine, and then we really have something. We’ll have cost-saving measures, we’ll be actually saving lives before people get sick. Me, I’m feeling great, and we’ll be releasing some data on that sooner than later.

Why do you think there have been so many obstacles to human testing for anti-aging gene therapy?

The obstacles are in the regulatory framework. At this point, it’s not really starting a fight to say that the U.S. FDA and other countries have stifled innovation. That’s just obvious. It’s too much paperwork, it’s too far-reaching, the costs to get through the U.S. FDA are too high. And there’s no reason, at this point, that we have to mix safety and efficacy with a price tag of over $1 billion. Those two don’t need to go together. We need to find out how to efficiently get therapeutics through to the public that may be life saving.

That’s not going to happen until you convince the FDA that aging is actually a disease.

Here at home, we just cannot move quickly enough for patients. We’re losing over 100,000 people a day to biological aging. We’re not really treating this like the catastrophe that it is. Ebola came up and killed many people. It’s a big tragedy. But it didn’t kill anywhere near the number of people that die every month of biological aging.

As a matter of fact, if you start to look at that and extrapolate the numbers, millions of people are dying in a matter of months. We just think of this process as being very normal, but it’s actually a very costly process. It’s going to hinder our future significantly. The silver tsunami has already hit the industrialized countries and it’s about to hit the whole Earth.

How will you convince the FDA that investing in it now is a better idea than paying for it later?

On the Earth, by 2020, there will be more people over 65 than under 5 years of age. So the 5-year-olds become 5, then 25, then 35 — they become the workforce — while the 65-year-olds are retired and are in imminent danger of 20, 30, 40 years of needed accelerated healthcare. So it really doesn’t work. We’re actually at a point where it’s not just fashionable. It’s not a vanity issue. It’s “How do we save economies?” How do we keep people working longer? How do we save the trillions of dollars that we spend every four years on major diseases [which have led to] no cures? The government — your employer — you — everyone saves so much money by mitigating these diseases that there is no reason to hold this type of technology back.

If this actually happens; is everyone going to have equal access to these types of therapies?

Yeah, absolutely. It’s going to happen very similar to computers or cell phones. At first the technology is very expensive, because it’s new. First it’s kind of like building a supercomputer, and then eventually everyone gets an iPhone. In your life when you look at that, you don’t ever remember living without an iPhone. Certainly you like an iPhone better than you would have liked it if you had to pay for the first supercomputer because your iPhone is much more predictable than the supercomputer was. But it’s that model, and we will get there as quickly as we can to drive down the costs so that everyone does have access to it.

Are we going to have to shift the retirement age? What’s the limit here?

Won’t you run into a problem finding people willing to take part in your studies, if they’re so experimental?

We have no end of volunteers, both healthy and sick. As a reminder, as far as the FDA’s concerned, in the past 50 years they have passed, through their gold standard, 50 drugs that have been pulled from the market. Some of those drugs were actually harmful, if not fatal, to patients. We cannot pretend that their standard has kept anyone safe. It was there initially to keep people safe. It’s not actually doing a good job of that. It definitely serves a purpose, where we want drugs with safety and efficacy, we want to keep the public safe, but not to the point where they’re dying, waiting for treatment.

If you’re letting people die without access to experimental treatments, then your safety and efficacy administration is failing.