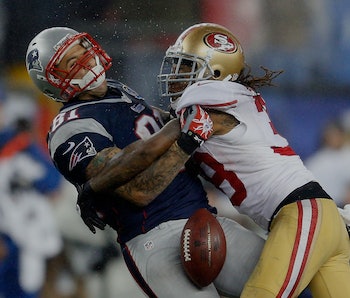 Chronic Traumatic Encephalopathy (CTE) is a serious problem for football players, but minor head injuries could also pose serious problems to athletes’ brains health, say scientists. The NFL is facing mounting evidence that links head injuries to CTE, the condition that afflicts athletes as a result of severe or repeated traumatic brain injury. Thanks to rapidly developing CTE research and high-profile case studies like that of former New England Patriots tight-end Aaron Hernandez, whose CTE symptoms were startling in severity, we already know a lot about CTE and its effects, which includes dementia, aggression, and depression.

But it turns out that even the more minor head injuries can affect brain functions, too. At the annual meeting for the Society for Neuroscience, in Washington, D.C., scientists presented research that adds to the ever-growing list of consequences that can arise as a direct result of head injuries. Here’s yet another new issue the NFL — and maybe FIFA and the U.S. Military — will have to address eventually.

On Tuesday, researchers presented four sets of findings that add more depth to the issues surrounding head injuries in sports. Here’s a brief summary of each one:

Todd Rubin, a doctoral student at Albert Einstein College of Medicine presented research showing that heading the ball, a very common occurrence in soccer, disrupts axons in the brain. Furthermore, Rubin reports that women are affected more strongly than men, which could account for differences in recovery time that scientists have observed.

Raymond Colello, an associate professor of anatomy and neurobiology at Virginia Commonwealth University outlined how professional football players, especially older ones, don’t follow safety guidelines when selecting their helmets. This suggests the need for more stringent enforcement of rules that are meant to protect players.

Brian Johnson, an assistant professor at the U.S. Air Force Academy, reported that Air Force cadets don’t report their concussions because they mistakenly believe they will be penalized for having multiple concussions. This suggests a dire need for better education on concussions for people who are at risk.

Melissa McCradden, a neuroscience postdoctoral fellow at McMaster University, presented research that outlines how sustaining a concussion or even just playing a single season of a contact sport can hurt an athlete’s performance on memory tests. She and her colleagues suspect that repeated impacts, even without traumatic brain injury per se, can inhibit the generation of new neurons in the hippocampus, a brain region associated with memory.

“Not only are newborn neurons critical for memory, but they are also involved in mood and anxiety,” McCradden said in a statement. “We believe these results may help explain why so many athletes experience difficulties with mood and anxiety in addition to memory problems.”

This effect is temporary, McCradden and her colleagues found, as the memory deficiences subsided after athletes had a month away from the sport.

“The important message here is that the brain does recover from injury after a period of reprieve,” says McCradden. “There is a tremendous potential for the brain to heal itself.”

But most professional athletes play every week, or more often, which suggests that this experimental result, in particular, is cause for concern for the NFL and other athletic organizations.