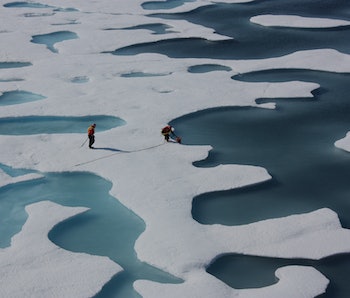 In 1992, over 1,700 researchers united under the Union of Concerned Scientists signed a letter calling for humanity to take notice of the profound impacts we’ve had on the global and local environment. The letter came to be known as the “Warning to Humanity.” Now, on the warning’s 25th anniversary, the scientists have renewed their commitments, raising the number of signatures to 15,364, representing 184 countries, and adding several dire updates to the original letter.

In “World Scientists’ Warning to Humanity: A Second Notice,” published Monday in the journal BioScience, lead author and Oregon State University ecologist William Ripple, Ph.D. and his thousands of colleagues double down on the original letter’s message: “Human beings and the natural world are on a collision course.” The original letter, entitled “World Scientists’ Warning to Humanity,” outlined specific areas of concern, including curbing fossil fuel use, slowing population growth, and basically just stop killing everything.

In 2017, Ripple and his thousands of colleagues report, this message is more urgent than ever.

“We are jeopardizing our future by not reining in our intense but geographically and demographically uneven material consumption and by not perceiving continued rapid population growth as a primary driver behind many ecological and even societal threats,” they wrote in the updated letter.

While the new letter emphasizes how dire the Earth’s situation is, it’s not all gloom and doom. In it, the researchers outline not only where we have room to improve but also where we’ve made meaningful progress.

“The rapid global decline in ozone-depleting substances shows that we can make positive change when we act decisively. We have also made advancements in reducing extreme poverty and hunger,” they write.

That being said, there’s still a long way to go. In preparing the 2017 update, Ripple and his graduate student Christopher Wolf combed through the scientific literature to examine the changes to the environmental factors identified in the 1992 letter: ozone depletion, freshwater resources, marine fisheries, ocean dead zones, deforestation, biodiversity loss, CO2 emissions, climate change, and human population growth. The situation for eight out of nine of these factors has only gotten worse.

The only one that has improved, ozone depletion, was the result of international cooperation as governments responded to the scientific community to curb the use of chlorofluorocarbons that were depleting the ozone layer.

The Second Notice doesn’t represent the opinions of some fringe group of alarmist scientists. Earlier in 2017, when Ripple began circulating the letter for scientists to sign, he hoped that it could get somewhere close to the 1,700 signatures the original letter achieved. The final number — 15,364 — shows just how universally scientists feel the urgency of our predicament, as the scientific community took note of the update and circulated it widely.

The thousands of authors that co-signed the 2017 update lay out a clear way forward:

Examples of diverse and effective steps humanity can take to transition to sustainability include the following (not in order of importance or urgency): (a) prioritizing the enactment of connected well-funded and well-managed reserves for a significant proportion of the world’s terrestrial, marine, freshwater, and aerial habitats; (b) maintaining nature’s ecosystem services by halting the conversion of forests, grasslands, and other native habitats; (c) restoring native plant communities at large scales, particularly forest landscapes; (d) rewilding regions with native species, especially apex predators, to restore ecological processes and dynamics; (e) developing and adopting adequate policy instruments to remedy defaunation, the poaching crisis, and the exploitation and trade of threatened species; (f) reducing food waste through education and better infrastructure; (g) promoting dietary shifts towards mostly plant-based foods; (h) further reducing fertility rates by ensuring that women and men have access to education and voluntary family-planning services, especially where such resources are still lacking; (i) increasing outdoor nature education for children, as well as the overall engagement of society in the appreciation of nature; (j) divesting of monetary investments and purchases to encourage positive environmental change; (k) devising and promoting new green technologies and massively adopting renewable energy sources while phasing out subsidies to energy production through fossil fuels; (l) revising our economy to reduce wealth inequality and ensure that prices, taxation, and incentive systems take into account the real costs which consumption patterns impose on our environment; and (m) estimating a scientifically defensible, sustainable human population size for the long term while rallying nations and leaders to support that vital goal.

None of these actions will be especially difficult to enact. What’s stopping them from moving forward is, to a large degree, the lack of consideration that policymakers have for the work of the science community. Ripple hopes this letter will provide evidence that thousands of scientists agree they will no longer be ignored.

“The scientists around the world are very concerned about the state of the world, the environmental situation and climate change,” Ripple told CBC News. “So this allows them to have a collective voice.”