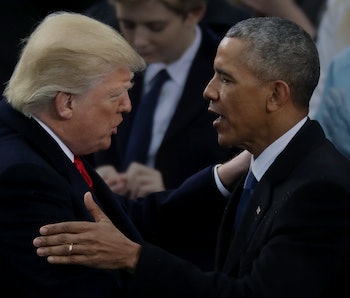 In October, President Donald Trump challenged his best frenemy Secretary of State Rex Tillerson to an IQ test after Tillerson publicly called him a moron. Trump was pissed, and rightfully so. By calling Trump’s intelligence into question, Tillerson cast doubt on his role as the leader of the United States. After all, America can’t have a moron as its president, right?

But a new study, published in the Journal of Applied Psychology, suggests that Trump might have benefited from leaning into rumors that he’s not that smart. In the paper, published Monday, a research team led by John Antonakis at the University of Lausanne showed that people who are highly intelligent are actually judged as pretty terrible leaders by their subordinates and peers.

The argument that Antonakis and his colleagues make is similar to the one made in an article that the left-leaning blog Forward Progressives ran in 2014: “The Simple Truth: President Obama is Too Intelligent for Republicans to Understand.” Its writer argued that because Obama was extremely intelligent, he also tended to focus on big-picture issues that many Americans simply could not understand, and thus he wasn’t an especially effective leader. In their study, Antonakis and his team discovered evidence supporting that idea.

The researchers analyzed the leadership styles and IQ scores of 379 mid-level leaders from 30 mostly European countries, also taking into account ratings of each leader’s performance, as judged by their subordinates and peers. These ratings were meant to determine each leader’s preferred leadership style, which ranged from the inspiring “transformational style” to the obstacle-clearing “instrumental style” to the “laisszez-faire,” hands-off style, which has previously been shown not to be helpful. Going into the study, the researchers hypothesized that people with very high IQs would tend to use worse leadership styles and therefore be less effective readers.

And they were right. Intelligence, at least as judged by IQ, and effective leadership were linked, but only to a certain point. Their pool of leaders had an average IQ of 111, and once they started looking at leaders with IQs past 120, they saw the relationship with effective leadership begin to reverse. People with IQs past this point, they noticed, tended not to use the effective “transformational” or “instrumental” styles of leading as much as those with lower IQs. (They didn’t, however, employ the bad leadership styles any more or less than everyone else.)

While IQ is admittedly not an especially accurate measure of intelligence and this study focused on a small slice of the global population, the fundamental question addressed in its title remains a compelling one: “Can super smart leaders suffer from too much of a good thing?” The researchers have yet to determine why people who are too smart tend to be worse leaders, but anecdotal evidence, like that collected during the Obama presidency, suggests that the problem lies in an intelligent leader’s inability to communicate in an inspirational way (for example, some have suggested that Obama’s linguistic choices catered only to elites) or their failure to see problems that regular people would see.

That said, this study does not suggest that a leader can get away with being unintelligent. Just like an over-intelligent leader, a complete moron in office will likely also lack the ability to communicate with the public and see the problems the public is most concerned about. But unlike an intelligent leader, a moron can’t be trusted to make the right decisions — regardless of whether his followers like him or not.

Thanks to evolution, genes related to higher education are becoming more scarce. Check out this video to find out more.

More like this
Science
5.13.2022 3:01 PM
Can restaurant menus help diners choose climate-friendly meals?
By Tara Yarlagadda
Mind and Body
5.17.2022 11:00 AM
First-of-its-kind study reveals transgender children are extremely unlikely to retransition
By Nick Keppler
Mind and Body
5.14.2022 11:00 AM
How to treat adult ADHD: A psychologist explains medication and more
By Laura E. Knouse and The Conversation
Related Tags
Share: