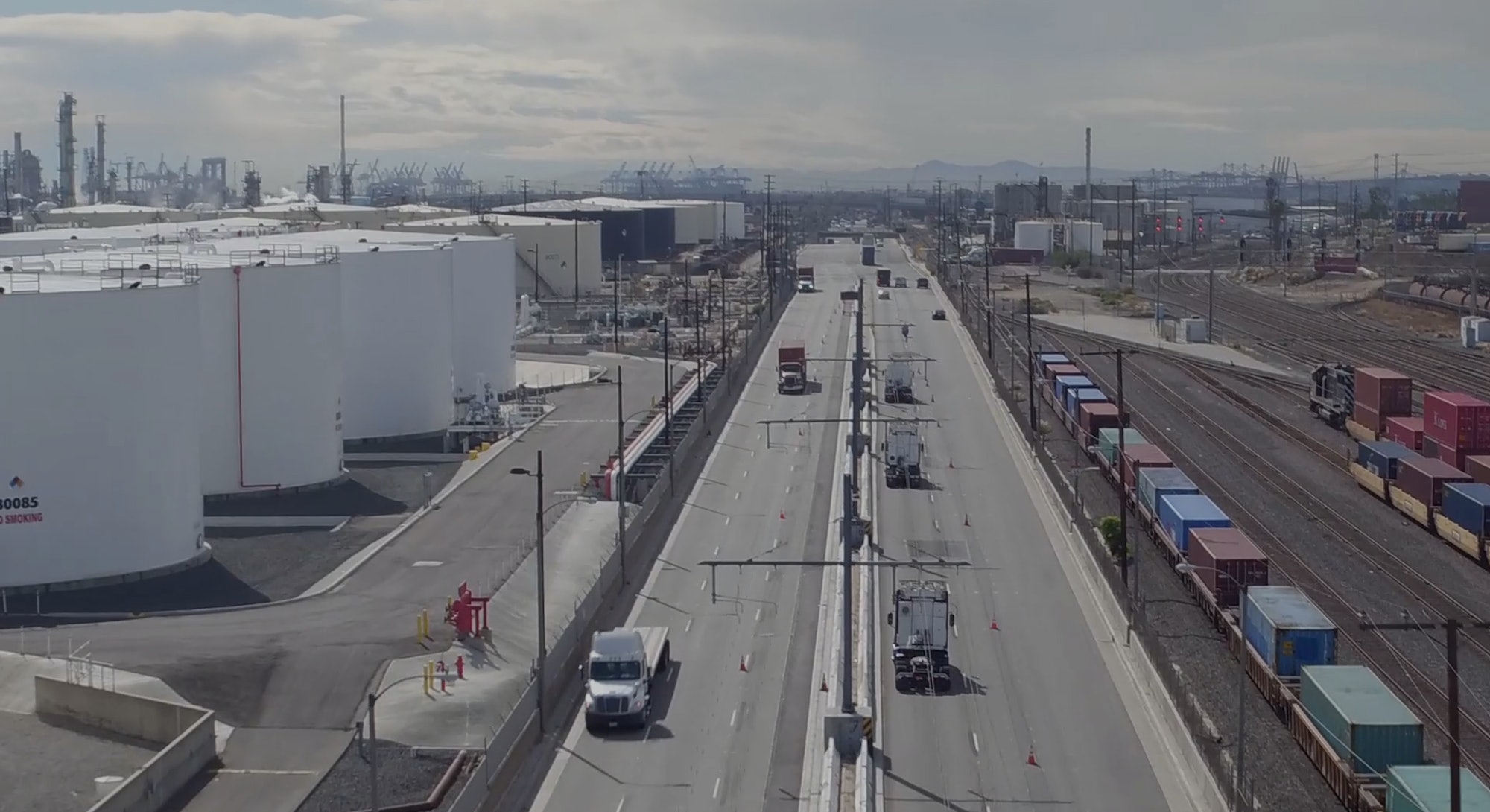 “Breathe in that smog and feel lucky that only in L.A. will you glimpse a green sun or a brown moon. Forget the propaganda you’ve heard about clean air; demand oxygen you can see in all its glorious discoloration.”

As is often the case, cult film director John Waters captured it more colorfully than anyone when he wrote about Los Angeles’s pollution in his book Crackpot. The smog of L.A. is as iconic as the Hollywood sign or the surf of Santa Monica.

There’s no single reason the haze of pollution defines Los Angeles more than any other American city. The second-largest city in the nation has been allowed to sprawl and stretch in a way New Yorkers could only dream of. Its location in a basin surrounded by mountains serves to trap more toxic air particles than might otherwise be the case.

But mostly, it’s the cars. No, scratch that: The millions of cars are a problem. The trucks are the problem. Nothing is responsible for more smog-causing emissions in southern California than the trucks that haul freight between the region’s cities and ports. And these trucks may just be too big to realistically run on electric batteries like the passenger cars built by Tesla and others.

One possible answer? Don’t electrify the trucks, electrify the roads. That process began last November on a mile’s stretch of highway in Carson located between the heart of Los Angeles and the main port of Long Beach. It’s called an eHighway, and its creators at Siemens — the electrification, automation and digitalization multinational — told Inverse it can considerably lessen highway emissions.

“We know there’s so much noise and pollution in this area,” Andreas Thon, Siemens’s vice president for Turnkey Projects and Electrification in North America, said at the time.

Thon oversees highway electrification projects for Siemens, which built the road in Carson and has tested similar highways in Germany and Sweden.

“The advantages of this system is, first, it’s zero-emission,” Thons said. “So the noise level is really reduced. And furthermore you have economic benefits because the electric drive requires less energy than the diesel one.”

The road’s setup would be familiar to anyone who has seen a trolley or streetcar trundle through a city. Specially designed trucks run underneath electric lines, each equipped with an instrument called a pantograph that makes connection to the lines and draws power to propel the vehicle. Three types of truck — a battery-electric, natural gas and electric hybrid, and a diesel hybrid — tested out the mile-long road, which cost $13.5 million to build.

That may sound like a lot, but Thon said the future cost of such highways should be closer to $5 million. That price would make it competitive with building more railroads, which are the only other option for the kind of heavy freight shipping that trucks can provide.

Siemens predicted transport needs will double by 2050, in line with technological advancement and population growth. While Thon doesn’t want to do away with rail transport, he said it just isn’t feasible to expand America’s already overtaxed rail infrastructure to accommodate that kind of growing demand.

But the case for these roads isn’t strictly or even primarily economic, according to Thon. Cutting truck emissions would have a huge impact on climate change and on the health of those who live near the most congested cities. Studies have shown living near the noise and pollution of busy highways is linked with increased risks of everything from cancer to dementia.

“Having been on the site the last two days, we have to do something,” Thon said. “That’s the main reason that we’re doing this. The main reason is the environmental aspect, both pollution and noise. The economic benefits come in addition.”

“The system is feasible.”

One advantage of this system, according to Thon, is that the big technological hurdles have already been cleared.

“I think we have proven in the last year that the system is feasible, that the technology is available,” said Thon. “So there’s nothing anymore to develop and we could immediately start the installation of such kind of system already in other places.”

The last hurdle will be acquiring the funding for widespread installation. Electrifying all 164,000 miles of highway in the United States would cost more than $800 billion. That’s a big price tag, but it’s roughly equivalent to the kinds of infrastructure plans that the Obama and Trump administrations have proposed over the past decade.

Not that every last mile of road would need to be electrified for the system to work. Thon suggests trucks could move from one electrified section to another with gaps in between. While running beneath the power lines, the trucks would both draw power for their immediate operation and recharge their battery.

“As soon as there is a section without the contact line, it uses the battery,” says Thon “And this can all be done in operational mode, so the truck does not have to stop or get put into a depot to get charged.”

The eHighway is exclusively designed for trucks and buses, so don’t expect your next car to be fitted with a massive pantograph. That’s a simple matter of logistics — the power lines are too high above the road for this to work with passenger cars. But companies like Tesla have already demonstrated batteries will work just fine for passenger cars.

Elon Musk looks to solve electric trucking with his much-anticipated Tesla Semi truck, which made its first cargo run earlier this month, an eHighway could offer competition for short-haul routes like this one. And for his part, Thon was skeptical that trucks like the Tesla Semi will ultimately prove feasible.

“I believe the technology for cars will go into batteries, but they cannot drive these big trucks on batteries,” said Thon. “You will spend so much time charging them and taking them out of operation, and then you would have to put so much batteries into this truck that you don’t have any place anymore for freight.”

As with the question of road versus rail, batteries don’t have to be a question of either/or. If Tesla or another company can pull off electric trucks and buses that can run for hundreds of miles on their own internal battery, that would also make a real difference to the pollution cities like Los Angeles face. As Thon said, his goal with the eHighway is bigger than business.

“I believe in climate change, I believe we have the responsibility to do something for all our kids in the future, and this is a feasible and available technology that we could implement,” he said. “I hope we will.”