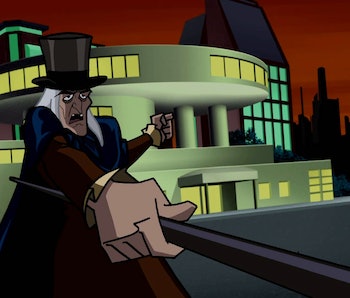 The latest episode of The Flash revealed the newest meta-human to hit Central City, and his name is a comics deep cut that pre-dates DC as we know it.

Drunk Barry Allen wasn’t the only meta-human to shed a few tears during “Girls Night Out” Tuesday night. After a creepy henchman crashes Iris’ bachelorette party, the ladies have a run-in with superpowered crime boss Amunet (Katee Sackhoff).

Amunet wants to hire Killer Frost, but only to protect her latest enterprise: a new meta-human whose tears are Central City’s latest “love drug.” Amunet calls this new meta “The Weeper.”

Long-time comics fans might recognize “The Weeper” as the title given to a few different villains over the years, with none of them even remotely resembling the character on The Flash.

The Weeper was originally published under Fawcett Comics as the chief nemesis of Bulletman and Bulletgirl before DC Comics licensed Fawcett characters in 1972 and later purchased them in 1994. (The purchase was primarily to gain ownership over the character that DC would rebrand as Shazam, who began under Fawcett as the first Captain Marvel.)

The Weeper, real name Mortimer Gloom, debuted in Master Comics in 1942 as a circus performer that went all vengeful crazy when he got fired. He’s got a real flair for the dramatic, dressing with a cape, top hat, and cane — and recruiting henchman he calls “The Bittermen.” He gets his namesake mainly because after he commits an atrocity or some kind of murder, he typically weeps afterwords.

Morty Gloom’s son later took up the mantle as the Weeper II after his father died, so he had a real reason to be sad. The character was more or less forgotten for a time before he was loosely integrated into the Batman corner of DC Comics after Fawett went out of business.

The original Weeper would go on to team up with the Joker on more than one occasion, which made for an enticing and strange combo of villains..

The first time was during the “Crisis On Earth-S” DC Comics event from the ‘60s that brought together a number of DC and Fawcett comics characters. The Weeper and the Joker, perfect villainous foils for one another, teamed up for a limited stretch.

During the tale, Joker refers to the Weeper as the first costumed supervillian to use a signature in his crimes, which supposedly inspired the Joker to do the same. The Joker finds Bloom in a bar after the crying criminal spent 30 years in prison. He’s — you guessed it — weeping.

Their weird team-up against Batman ends with the Joker crying and the Weeper laughing, as it should.

But what does any of this have to do with The Flash? The short answer is almost nothing. Even the Thinker presented on the show is a loose adaptation of the DeVoe we’ve seen in the comics before. But this Weeper is little more than an Easter egg nod to DC Comics.

Thus far, the Arrowverse Weeper is more hapless victim than maniacal supervillain. After he escaped from Amunet’s capture towards the end of the episode, the Thinker showed up in his hover-chair and captured him, saying, “I went through a lot of trouble creating you. I can’t have you running away, not until you’ve completed the task for which you were born.”

We can’t possibly know what that task might be, but it’s probably not riding through a parade in a hearse tossing deadly tear gas into the crowds and then crying about it after — which is exactly what Mortimer Bloom once did.

The Flash airs Tuesday nights at 8 p.m. Eastern on The CW.

More like this
Entertainment
Feb. 1, 2023
The Batman: Part II — Everything we know about the Robert Pattinson sequel
By Gabrielle Bondi
Entertainment
9 hours ago
Everything You Need to Know About DCU’s Batman: The Brave and the Bold
By Mónica Marie Zorrilla
Entertainment
Feb. 2, 2023
DC Is Finally Putting Robin in a Batman Movie. It's About Time.
By Eric Francisco
LEARN SOMETHING NEW EVERY DAY.
Share: