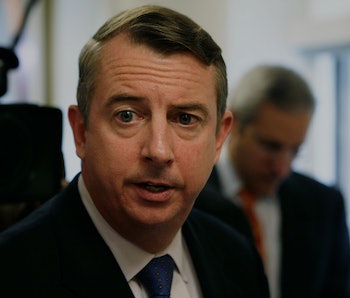 Ed Gillespie marked his election loss in style. The Republican hopeful for Virginia’s governor lost to his Democratic opponent Ralph Northam in Tuesday’s vote, as part of a sweeping set of wins for the party across the state. Unfortunately, Gillespie changed his birthday on Twitter to November 7, meaning that as the results were coming through, animated balloons were floating down across his page.

Gillespie’s real birthday is on August 1, but by changing his birthday to November 7, the politician’s profile rained down balloons to draw attention to election day.

Twitter first introduced the feature in June 2015. Users who want to add the optional date to their profile can hit “Edit profile” to add the day and set who can see it. The site offers support for partial dates too, for people who want to celebrate the day without revealing their age.

Of course, once Gillespie lost, the balloons remained:

It’s not the first time a politician has slipped up trying to adeptly use social media. In May, president Donald Trump sparked a wide variety of memes after sending a tweet with the word “covfefe.” Just hours after, searches for the term spiked. Press secretary Sean Spicer doubled down on the error, claiming that a “small group of people know exactly what he meant.”

In the United Kingdom, then-shadow chancellor Ed Balls went viral when, instead of searching Twitter for mentions of his name like he intended, he posted a tweet that simply read “Ed Balls”:

As political campaigning integrates itself further with social media, it’s unlikely that Gillespie will be the last politician to publicly slip-up on the internet.

More like this
Culture
Feb. 7, 2023
Lost Never Solved Its Weirdest Sci-Fi Mystery, But This Episode Came Close
By Jake Kleinman
Culture
Feb. 4, 2023
The End of the Cold War Could Have Killed James Bond. Instead, it Made Him Stronger.
By David Grossman
Culture
20 hours ago
How One Lost Episode Solidified Sawyer as TV’s Greatest Antihero
By Jake Kleinman
LEARN SOMETHING NEW EVERY DAY.
Related Tags
Share: