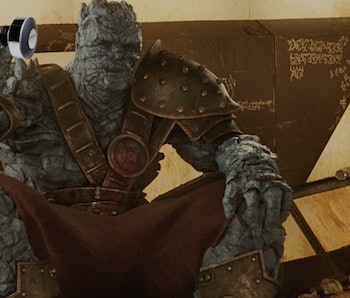 We’ll never see Hulk fight Superman, because as much as we all love a good crossover team-up situation, Marvel and DC keep their cinematic universes far apart. But that didn’t stop director Taika Waititi from embedding the weirdest crossover Easter egg of all time into Thor: Ragnarok. This one isn’t exactly easy to follow.

In an interview published on Thursday, Waititi told Fandango that “the Shake Weight is actually a DC crossover.”

No, Thor won’t trade Mjolnir in for a Shake Weight after the magical hammer is destroyed. The real explanation for this “crossover” comes from a rather convoluted story about Waititi’s acting history.

Light spoilers about a Thor: Ragnarok character’s love for his Earth relics below.

In Thor: Ragnarok, Waititi voices and provides motion capture for the rocky gladiator Korg, which officially makes him yet another actor that’s been in Marvel and DC films. It’s easy to forget that in 2011, he appeared in Green Lantern alongside Ryan Reynolds as Hal Jordan’s best friend Thomas Kalmaku.

“So I was in New Orleans and I was in Green Lantern, but I was barely doing anything. I’d be in my hotel room and it’d be like 1 AM, and the infomercial for the Shake Weight came on. I was like, “Screw it! I guess I’m buying everything I see on TV tonight — I’m gonna buy knives and some sewing thing. I bought exercise DVDs, too, but the one thing I bought that I kept was that Shake Weight.”

During Thor: Ragnarok, Karl Urban’s Skurge rattles off a list of items that he brought back from a visit to Earth. He gets some impressive guns we’ve seen in some trailers, but he also weirdly brags about a Shake Weight. The device we see in Ragnarok is the same that Waititi purchased in 2011.

Waititi himself calls this a “crossover” because the Shake Weight’s been on the set of both movies even if it didn’t actually appear in Green Lantern.

Sadly, this might be the closest we ever get to a legitimate MCU and DCEU crossover.