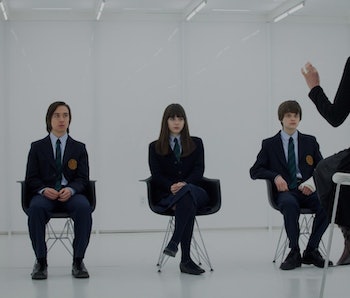 Five weeks in, Wayward Pines still has a lot of questions left to answer. While the show has built a scaffolding of intrigue, it still feels like little more than a facade. What the hell is inside this thing and is the show’s metaphorical roof going to cave in? That depends on the answer to some specific questions: What is the town for? Who is it for? Who are they hiding from?

Viewers started to get those answers this week — in the worst way possible. Instead of following that old adage about showing, not telling, Wayward Pines offered up roughly 45 minutes of exposition in which students get a damn civics class. It was as exciting as a civics class.

Let’s just cut the shit and offer the big reveal: It is not 2014, but 4028. Mankind has devolved. Wayward Pines is not a town, but an ark, the last bastion of civilization. There’s nothing else out there.

According to the show’s fresh new lore, a scientist two thousand years ago named David Pilcher predicted the fall of man by the aberrations — “abbies,” or those beasts outside the walls — and worked to preserve human civilization. His work is Wayward Pines. Also, he’s Dr. Jenkins.

High five to Wayward Pines for speeding through that fact and not turning it into an obvious, season-long question. It is unknown how David Pilcher survived two thousand years, but what is known is that he’s right there, and right now he just saved a wandering Burke and is about to show him the truth.

There was a larger theme of orientation in this episode: Ben Burke had a very formal initiation into his school, from the boring civics course about the town to the Eyes Wide Shut-ish candle ceremony. (Did all the students just wait there during the whole class? Shouldn’t they be doing algebra?)

Mrs. Burke, meanwhile, was thrust into her job as a realtor with a pervy partner. Assigned to another new citizen of Wayward Pines, Mrs. Burke finds out a crucial detail about pines — stasis pods that all incoming citizens are placed in — that Ben didn’t learn in his history course.

Ethan Burke, picking up from last week, has wandered into the wilderness, finding himself within range of the abbies before getting picked up by Pilcher in a chopper.

The entire Burke family has had some kind of formal orientation into Wayward Pines now. They’re a part of this town, and it won’t be easy for them to escape. But why would they want to? Motivations are getting cloudy.

If we follow the town’s logic closely, it’s broken. Made in China broken. According to Mrs. Fisher, what she meant last week by the kids being the community’s future is slightly more… literal. The teenagers/kids of Wayward Pines know the truth, but they’re sworn to secrecy from their parents. Adults, having spent the majority of their lives in a time before Wayward Pines, would go… nuts, I guess, if they knew the truth. Huh?

The most glaring questions have now been answered. I can stop guessing the beasts as mole people or Juggalo fans, but mutated humans. They’re akin to the Reavers from Firefly (also a Fox series). We now know the time distortions; people arrive into Wayward Pines by “accidents,” and are stored in stasis pods until heaven knows when. The timelines for characters like Kate Hewson, Beverly, and even Nurse Pam are still muddy, but that’s easy enough to shrug off.

But there’s still more to be explained. What’s up with Jenkins’/Pilcher’s relationship with Hassler, Ethan’s boss in Seattle? Or just Pilcher in general, for that matter? How could he be involved there if Seattle — and government, and society, and literally everything else — doesn’t exist anymore? Do any of the adults like Kate Hewson actually know about the abbies?

Now that we know the show’s premise, it’s going to have to have a plot.

You have two episodes left, Wayward Pines, and so far I’ve ended every recap this season by asking questions. I demand more answers, but I’m not sitting through another civics class.