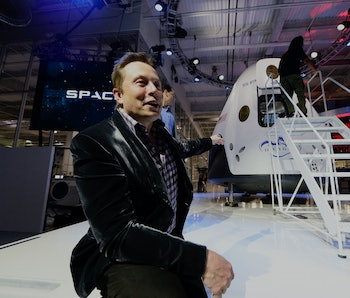 Investing in SpaceX seems like a good way to diversify your portfolio, right?

However, being a privately-held company, the space exploration venture that began in 2002 with a mariachi band doesn’t offer direct buy-in options for investors, and may never will, if founder Elon Musk has his way. The company’s mission to Mars is slated for 2024 (light-years before NASA’s publicly funded mission), and Musk has made it clear he doesn’t want investors messing with the timeline. For instance, investors could call for putting more resources into projects that will make money in the near-term, like space tourism along the lines of Blue Origin or Virgin Galactic.

This means an initial public offering (known as an IPO) is out of the question, with the company repeatedly denying plans to go public. Musk has expressed his concern that SpaceX might “somehow get taken over by investors who just want to maximize the profit of the company and not go to Mars.” The cliche of the stock price becoming the product could very well come true if Musk were to go public with SpaceX.

The good news is there is a slight workaround to owning a piece of SpaceX, and it doesn’t involve partying with Elon Musk in the wee hours of the morning, although, never say never.

As usual, it’s Google to the rescue.

Because SpaceX is partly owned by Google’s parent company Alphabet Inc., in theory owning a chunk of Google stock is a way to indirectly grab a piece of the extraterritorial action. Along with Fidelity, Google has invested $1 billion in SpaceX, the New York Times reported in January 2015. At the time, there was speculation that Google would use its connection with SpaceX to send up small satellites that would capture images for its Google Earth program.

Alphabet (GOOGL) stock value topped more than $1,000 a share on October 26, the same day it reported its third quarter earnings. It was the latest milestone in a steady rise since the company went public in 2004 (debut price: $54), with Alphabet crossing the $600 billion valuation mark in 2017. Its net income — earnings after the costs of doing business are taken out — for 2017 was $15.6 million, while it had an increase in revenues year over year from 20 percent to 24 percent, according to a Q3 earnings report.

And arguably the best part of buying Alphabet shares is the added bonus of owning a bit its suit of products, including Google, YouTube and even their driverless car venture.

But before you put your next paycheck into a single Alphabet share, unless you’re an experienced trader, it’s always important to diversify stocks at the lowest risk possible.

One of the easiest way to buy low for a newbie investor is to put spare change into entry-level investing apps like Acorns, Stash or Robinhood..

Ultimately, these easy to use apps will generate you a diverse portfolio, which will include — among others — Alphabet stock.

If you liked this article, check out this video on the nerdy ways Elon Musk comes up with the names for his inventions.

More like this
Innovation
Jan. 25, 2023
Starship orbital flight: SpaceX successfully loaded the rocket with over 10 million pounds of propellant
By Mike Brown and Molly Glick
Science
Jan. 17, 2023
What’s happening with Starship? New SpaceX photos show a launch could happen soon
By Jennifer Walter
Entertainment
11 hours ago
Doctor Who Could Become the New Marvel — But There's a Catch
By Ryan Britt
LEARN SOMETHING NEW EVERY DAY.
Related Tags
Share: