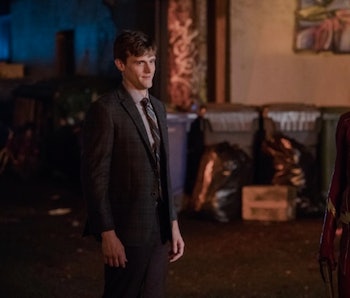 Having lost Wally West to a sabbatical last week, Team Flash gets a much-needed new ally in Ralph Dibny, aka the Elongated Man. “Elongated Journey Into Night” offers up another fun episode of The Flash with lots of visual humor to go around. Best of all, Team Flash gets a new superpowered ally.

Ralph Dibney was a crooked cop (of sorts) that got kicked off the CCPD after he planted evidence to convict a supposed murderer. Barry figured out the truth and got him fired. As a result, he and Barry sort of hate each other, and their tension is a point of comedy in the episode.

It’s no wonder that he and Barry don’t get along, because they couldn’t be more different. Barry’s view of justice can be almost a little too straight at times; he’s all about following the rules. Someone like Dibney, who operates in moral grey areas, frightens Barry.

When we meet Dibney at his office, “private investigator” on the door has investigator is crossed out with “dick” written over it. It’s all cheap comedy shot that actually works, because Dibney winds up being a pretty comical addition to the show. He’s a goofball whose limbs elasticize to impossible lengths, and impressively, The Flash avoids making any penis jokes.

Dibney isn’t quite a villain — as Barry might have everyone believe — but his still pretty sleazy. Not only does he hit on clients and bend plenty of rules in his favor, but he’s actively extorting the mayor of Central City. You shouldn’t care too much about this, though, because the mayor is a crooked gangster. (Star City has a much better mayor these days.)

When the mayor’s generic thugs try to drop Dibney off the roof, his elasticity powers kick in. Sure enough, he was on the bus when Barry got out of the Speed Force, so he’s got powers now. Back at Team HQ, everyone freaks out about Dibney, whose face kind of melts and stretches along with his limbs. “Allen,” he shouts, waggling a finger, “you and your S.T.A.R. Labs nerds better put me back together!” Iris shrieks. Joe throws up. Caitlin keeps it together and figure out a way to help.

Actor Hartley Sawyer is decent as Dibney, and he sort of seems like he’s channeling his best Ace Ventura at times (the pointed jaw helps) or one of Jim Carrey’s other zany characters. The Mask also comes to mind when Dibney catches a bullet in the forehead and sneezes it out like it’s a booger.

After Dibney’s essential in saving Joe and stopping the mayor, Barry gives him the formal offer to come and train at S.T.A.R. Labs, offering him a shot at redemption.

But how will the wisecracking Ralph Dibney fit in with the rest of the team? And can The Flash avoid having him fall for Caitlin like every single male newcomer has in the past? We’ll have to wait and see.