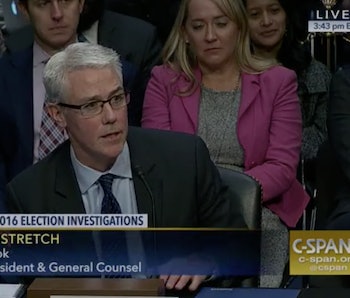 We’re here to find solutions,” Senator Lindsay Graham said at the outset of Tuesday’s public congressional hearing on Russia’s use of social media to affect the 2016 election. Unfortunately, he didn’t get any.

While congressional investigators came down hard on Twitter, Facebook and Google, representatives from each company provided little more than a broad commitment to improving oversight on their individual platforms.

The hearing was held by the Senate Judiciary Subcommittee on Crime and Terrorism, ahead of hearings before the Senate and the House on Russian interference that are scheduled to take place Wednesday.

One of the most profound takeaways from Tuesday’s hearing, was just the overwhelming amount of activity coming to Facebook, Google, and Twitter from foreign actors, as well as the lack of oversight the three internet giants have had in the past. Over the course of the hearing, Stretch took a large brunt of the questions from various senators.

Vermont Senator Patrick Leahy took a particularly interesting approach in exemplifying Facebook’s lack of ability to control its content when it was his turn to question Stretch. Leahy brought out a board that showed numerous hate speech-ridden advertisements that he said were currently on Facebook.

“With all due respect to your companies, I hear a lot of Johnny Come Latelys,” he said, referring to what he felt was a latent effort on the part of Google, Facebook and Twitter to step up their oversight.

“And when I mention lately, these were on today,” Leahy said, referencing to the board.

“Now it’s a problem. Can you tell me these aren’t linked to Russian organizations?”

Stretch appeared to dance around the question slightly, as he tended to during much of the hearing, eventually conceding that Facebook would have to go through a detailed process to determine if the content was in fact created by a foreign actor.

At this point, Leahy pivoted to an example that really showed the disconnect at times between Facebook’s ideological line and its actual impact on the world. Leahy mentioned that figures promoting the extreme violence against the Rohingya people in Myanmar has been playing out via prominent Myanmarese personalities on their Facebook pages.

“You’re monetizing off of users in the developing world, and you have the absolute right to do that, but what are you doing to make sure it’s not being used to undermine democracy? It’s not just losing votes, it’s losing lives.”

“We view our platform as a way of providing greater visibility into issues,” Stretch responded.

Stretch said that teams at Facebook are working with local organizations to monitor hateful activity, but he didn’t provide any real specifics, only reiterating that Facebook views itself as a tool to raise visibility rather than to promote hatred.

But what if the only voices that are visible are the ones promoting misinformation — like government officials in Myanmar who are posting a false narrative of the Rohingya as an aggressive group, contributing to an ethnic divide as well as violence. Based on Tuesday’s hearing, Facebook appeared ill-equipped to answer that question.

“Please understand, I admire what you’ve been able to do in reaching people,” Leahy said. “But you have a great responsibility.”