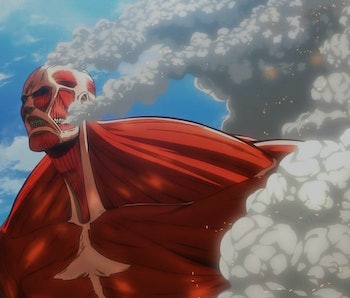 Attack on Titan fans rejoiced when the learned Season 3 would premiere sometime in 2018, a mere one year wait between Season 2 and 3 compared to the three-year gap between the first two. Now, the Season 3 premiere date has been locked down even further.

At a reading and live orchestra event for Attack on Titan on October 29, we learned that the anime’s third season would be dropping in July 2018 (via Anime News Network). Along with the premiere details, a new compilation film that would recap the second season was revealed, which will come out on January 13, 2018 and will be subtitled Kakusei no Hōkō (The Roar of Awakening). A key visual for Attack on Titan: Season 3 was also released, featuring a character named Kenny, whose identity is a big spoiler.

When Attack on Titan’s third season was announced on June 17, Funimation uploaded a teaser video showing what’s to come to YouTube. The video doesn’t contain any new footage or dialogue, but there are some illustrated teases of future events.

While the event didn’t yield anything on the order of a trailer for Season 3, fans are probably just happy to hear that there seems to be no chance of Attack on Titan’s return somehow being delayed.