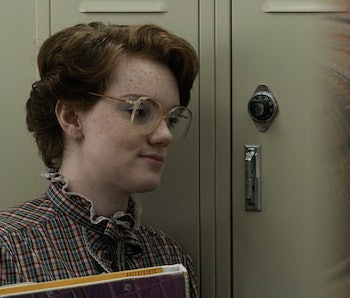 When the Demogorgon murdered Barbara Holland in Season 1 of Netflix’s Stranger Things, fans demanded #JusticeForBarb. Barb gets that justice in the show’s sophomore season, as Nancy and Jonathan work tirelessly to bring the truth of her death to light. But there’s another character who needs avenging now.

Her name was Mews, and she was an orange tabby cat.

Now, some people will tell you that Sean Austin’s Bob, a good-natured soul who dies tragically in the penultimate episode, is Season 2’s Barb. It’s a solid case, and while Bob deserves some justice, I, respectfully, disagree. The injustice Mews endured is beyond the pale.

Mews, Dustin’s mom Mrs. Henderson’s beloved cat, meets her end in the fourth episode of Season 2. After Dustin finds Dart, a disgusting booger-pollywog that the rest of the gang (correctly) realizes is from the Upside Down, he bonds with it, lying to his friends and keeping it as a pet.

While Dustin is away, Dart grows bigger, escapes from his tank, and kills and eats Mews.

That’s messed-up, but it’s Dustin’s cavalier, borderline psychopathic response to his kitty getting murdered that really pushes this over the edge. He doesn’t shed a tear for Mews, but instead hides the evidence and lies to his mom so he can get her out of the house while he traps Dart in the cellar. He also takes some time to casually get Mews’ blood out of the carpet.

Dustin looks his mom dead in the face and tells her that Mewsy was spotted across town, filling the grieving woman with false hope and sending her on a wild goose chase. Dustin even gives his mom an affirmative, double thumbs up as he lies, toying with her emotions even as he knows the cat is dead. Sure, dealing with Dart and not letting his mom find out is important, but the casual way he manipulates her is devoid of empathy and emotion. I’m out on Dustin, to be honest.

You might argue that Mews got justice when her killer was thwarted and Mrs. Henderson got Tews, an adorable kitten, as a replacement. This is wrong. That’s not justice — that’s a coverup. And, even if it was justice, Mews needs nine times as much justice, because she was a cat.

Stranger Things 2 is currently streaming in its entirety on Netflix. #JusticeForMews.