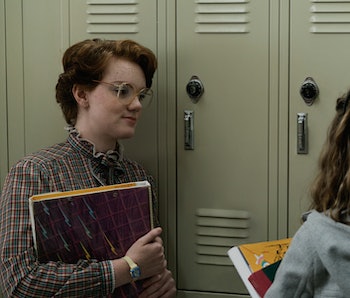 Barb is dead, and no matter how weird Stranger Things season two gets, she won’t be coming back — but she may get justice.

Netflix boss Reed Hastings recently told The Guardian “We would be dumb not to,” greenlight a second season of Matt and Ross Duffer’s supernatural summer hit, but there’s still no official confirmation. If it does happen, however, the show’s creators Matt and Ross Duffer said that Barb won’t be a part of it.

“I can’t see it [Barb’s return] happening,” Matt Duffer told IGN. “But Barb will not be forgotten. We’ll make sure there’s some justice for Barb. People get very frustrated, understandably, that the town doesn’t seem to be really dealing with Barb. That stuff is all happening. We’re just not spending any screen time on it.”

The Hawkins, Indiana redhead (spoiler alert) met her tragic end at the hands of the fearsome Demogorgon. For a while, nobody noticed she was gone, mostly because she was kind of a buzzkill to Nancy at Steve Harrington’s party. Barb put up a good fight, and fans took to the internet to meme-ify her in hopes that the Duffer duo would bring her back once Netflix gets around to making Season 2 official. But, alas, that’s only wishful thinking.

So, shed a tear. Barb is definitely gone. But it seems the Duffers have heard the criticisms about the denizens of Hawkins just kind of forgetting about her disappearance to focus on Will Byers by making sure to address it next season.

“Season 1 actually takes place over the course of six or seven days – its a really short period of time. So part of what we want to do with hypothetical Season 2 is to explore the repercussions of everything that happened,” the creators told IGN.

That fallout also might involve someone who was also a victim of the Demogorgon — Matthew Modine’s evil Dr. Brenner.

“I would say that if we were going to kill Brenner… as an audience member watching the show, if that was his death, that would be very unsatisfying to me – when the monster jumps on him and we cut away,” Matt Duffer said. “He would deserve much more than that as an ending. So yes, there’s a possibility of seeing him again.”

It looks like the Duffer brothers are taking cues from the supposed death of The Hound at the end of Season 4 in Game of Thrones. We assumed he died, but it wasn’t explicitly shown on-screen, and so he popped back up again in Season 6. The inevitably deformed Dr. Brenner, who could very well turn into the monster himself judging by the way people affected by the Demogorgon act, will be back too.

Stranger Things Season 2 talk is really heating up. Now all we need is for Netflix to make it happen.